The North Corvallis Timberhill area was almost burn to a cinder later this Saturday. Local firefighters mobilized a large number of members to fight the 150-acre blaze during the night. Cory Penselin, one of the firefighters in the team had worked for 30-hours straight to put out the blaze. A Good Samaritean gave him a Monster energy drink as a sign of gratitude. He said that in his 19 years of service at the fire department, he had never witnessed this type of response to a fire that appeared one night before. 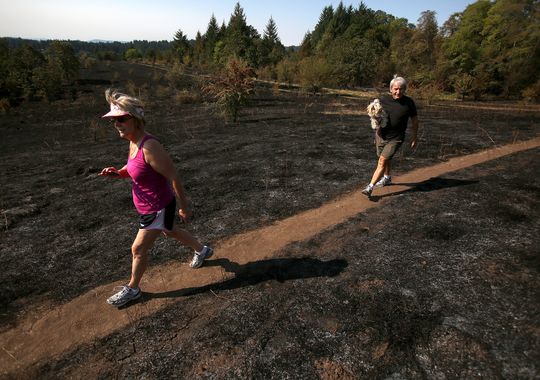 “It’s what we train for all the spring and summer.” – Cory Penselin

The fire department, which was already operating with limited resources due to many calls in other areas of the city, responded to a NW 29th Street and Goldfinch Drive to discover that the wildfire was quickly moving towards residential areas. This development prompted temporary evacuation of homes in the area, including the home of Linda Weaver who lives on 29th Street, close to the park.

“A fireman rang the bell to my house and said you have 20 minutes to get out.” – Linda Weaver

In less than three hours all the residents from the NW 29th Street or close to the NW Walnut Boulevard and Crescent Valley Drive were ordered to evacuate. Other homes, which were a bit further away from the mandatory evacuation area were placed under level 2 evacuation. This means that they could stay there but they should be ready to leave at a moment’s notice, said Corvallis Police.

The wildfire burned well into the night, and by 11 p.m. it had yet to be contained by firefighters, who despite all efforts, were hindered by strong winds and the difficult terrain. At approximately 1:30 P.M., evacuated residents were allowed to return to their houses. Soon after, firefighters managed to make a line around half the fire, but it had yet to be contained.

Full control of the situation was only ensured after the Oregon Department of Forestry sent in a bulldozer to calm the fire. According to the forecast, the temperatures in the 90s and winds increased the chances for a new fire to start.

Ten individuals from the South Fork Forest camp came in at 9:30 A.M. at the Chip Ross Park on Lester Avenue, dressed in heavy gear to dig a fire line. By 10 A.M. the danger had subsided and firefighters were extinguishing remaining hot areas and mopping up. Another 10 agencies responded to the fire situation.

“We have had a chance to see what resulted from the fire (…) i’m sorry for the hazards these people have to undergo.” – Ed Taylor, longtime resident of Corvalis

The wildfire did not come as a surprise, considering the dry weather and strong winds.