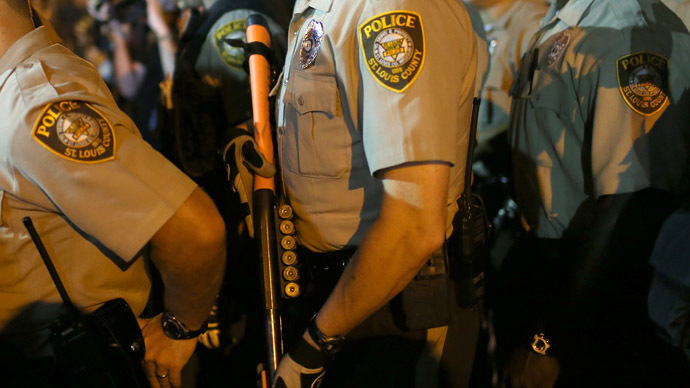 Authorities have reported that a police officer was shot on Saturday evening in Ferguson, Mo., as protests were raging on over the death of a teenager who had been shot last month by police.

According to Brian Schellman, spokesman for the St. Louis County Police Department, the injuries sustained by the police officer (a woman) weren’t life-threatening. Officers from both Ferguson and St. Louis County had already been organizing a massive manhunt for the suspect. The shooter fled into a local neighborhood soon after the incident.

Witnesses at the scene claim that a civilian was also shot, but authorities deny such reports.

“A police officer has been shot tonight. That’s the only person who has got shot,”

The shooting took place on Smith Avenue in Ferguson, next to the new Community Center. Although police cars immediately converged on the area, the gunman managed to escape.

Demonstrators have been protesting for over a month, after Officer Darren Wilson shot and killed Michael Brown, an 18-year old unarmed teenager. The case has fed simmering racial tensions in the Ferguson suburb, as Darren was white and Brown African American. According to protesters, authorities (who are predominantly white) discriminate against and often harass African American residents.

I want to say this to the Brown family. No one who has not experienced the loss of a child can understand what you’re feeling. I am truly sorry for the loss of your son. I’m also sorry that it took so long to remove Michael from the street. The time that it took involved very important work on the part of investigators who were trying to collect evidence and gain a true picture of what happened that day. But it was just too long, and I’m truly sorry for that.”

However, despite these apologies, Brown’s family is unmoved. They want justice and for them, justice means that Chief Jackson be removed from his position and, most importantly, that Officer Darren Wilson be placed in handcuffs and prosecuted for murder.