You are here: Home / National News / An Explosion in Paris Killed at Least 6 People 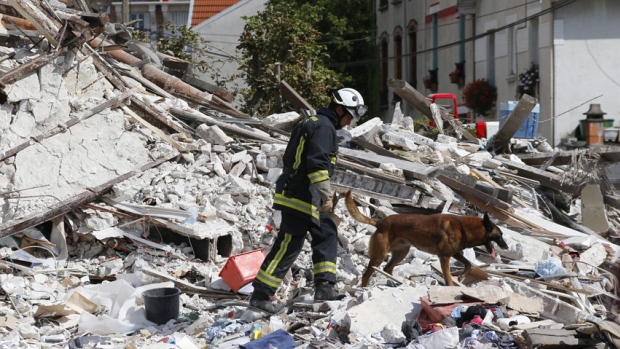 An explosion that caused an apartment block to partially collapse in Paris, France, killed at least 6 people, according to latest reports. A mother and her two teenage children were among the dead.

The bodies of a child believed to be around 10 years old, a boy aged something between14 and18 and two women were recovered from the remains of the four-store building in the northeastern suburb of Rosny-sous-Bois.

Two more bodies were found late in the evening and at least two other are expected to be discovered under the ruins. Nevertheless Gaetan de Raucourt, head of the Paris firefighting department, said there was still hope that occupants had found “pockets of air” amid the wood and dusty concrete rubble. “People might be sheltering there. We still have hope of finding survivors,” he said.

French Interior Minister Bernard Cazeneuve has said a gas leak is believed to be the cause. Moreover a fire service commander, Gabriel Plus, said gas and electricity works were on site, but would not confirm their link to the disaster.

“Our house moved, we were trembling from fear,” said Pauline, a neighbour who lives about 100 yards from the explosion, explained that the explosion was so loud that “our ears were ringing”. Ghislaine Poletto, 55, also lives close to the collapsed building. She “jumped into her trousers” and hurried to the site, where along with neighbours “we managed to pull two children out”. One of them had been “protected by a mattress and a board above his head, which saved his life,” she said.

GRDF, the company in charge of delivering gas to homes, said that “no leaks had been reported previously” in the area. But Maryline Yyvon, who also lives near the explosion site, seems to think otherwise. “They’d been digging under the sidewalk just in front of the building,” she said. “Given the force of explosion, it wasn’t just a gas canister, that’s for sure,” she added.

A shelter in a nearby school with an on-site medical team for families hit by the blast was set up by city officials.

All in all, 12 were pulled from the wreckage by firefighters, but 4 others who also lived in the building had not been accounted for by last night. However, a police spokesman explained there was no certainty that all of them were actually home at the time of the explosion.

Last night, police said three of the building’s 24 residents who were originally feared to have been buried, were not present at the time of the explosion.