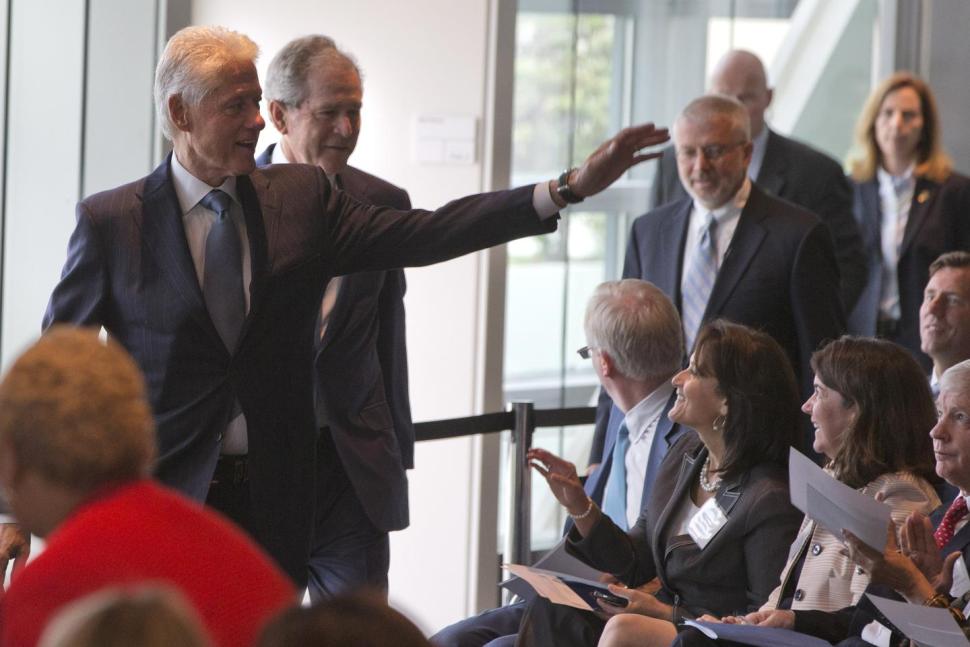 During their Washington launch of the Presidential Leadership Scholars program, former U.S. presidents Bill Clinton and George W. Bush took the stage on Monday at the Newseum.

The Leadership Scholars Program is designed to provide those in government, business or academia the opportunity and tools to cultivate their leadership skills and represents the hope that more people will become inspired to serve. Actually, Bush stated that he hopes the Leadership Program will give these people the opportunity to serve in a time when the people is constantly disillusioned by politics and politicians.

The program is a joined effort by former president Bill Clinton, George H.W. Bush and the Lyndon B. Johnson presidential centers.

The 42nd and 43rd Presidents were in a light mood and even joked around about not being able to get away from each other.  Even Former Secretary of State Hillary Clinton attended the event and wished her husband well in this initiative, and maybe even get a lesson or two in presidential leadership as she herself will be walking in her husband’s shoes very soon.

The two former presidents even told the public about Bush’s tradition during his second term of calling former president Clinton daily (at least twice) to discuss the issues of the day. According to Clinton, Bush would call and ask his perspective and then approach decisions with resolve regardless of whether Clinton agreed with them or not.

Then, President Bush prepped Clinton for becoming a grandparent, as his daughter, Chelsea, has announced that she is expecting her first child. He warned Clinton that with the arrival of his grandson or granddaughter, he would not only fall in love again but that he will be moved to the lowest position in the pecking order of his family.

After their terms, the former presidents explain that they have become friends and that they admire each other’s abilities of leadership and communication.

George W. Bush senior was not in attendance but had a letter of support delivered to the two former presidents, noting that both Clinton and his son should make sure to keep their remarks brief for the audience’s sake. He also made a humorous remark, saying that not all presidents are the same, as in, not all of them skydive.