You are here: Home / National News / Egypt Involvement in US-led Coalition against IS Miltiants 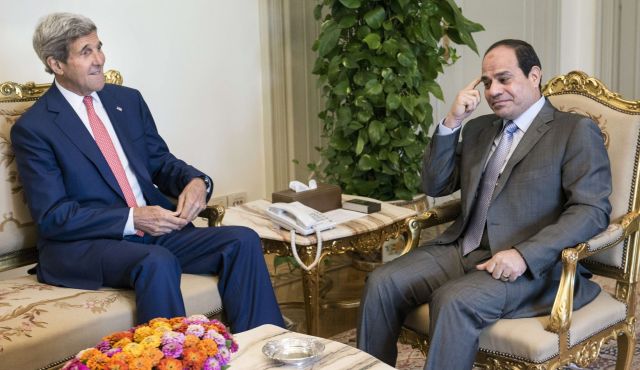 John Kerry, U.S. Secretary of State landed in Egypt on Friday, a day before his meeting with Egyptian president Abdel Fattah al-Sisi at the presidential palace in Cairo.

Kerry’s visit clearly suggests that the U.S. is interested in the long-term partnership between the two governments in the fight against the Islamic State extremists.

According to Kerry’s statements, Egypt’s involvement is essential in the denouncing of the violent ideology that governs the Islamic State group. The U.S. Secretary of State described Cairo as both an intellectual and cultural capital of the Muslim world that may very well play a critical role in the war against the terrorists.

After his meeting with the Egyptian president, Kerry spoke about the possibilities in which Egypt and the United States could collaborate while not actually disclosing the exact topic of their conversation. It seems, however, that Egypt will not be sending in troops to fight off Islamic State militants. Instead, it may just represent the logistical and intelligence support that the coalition needs.

Kerry’s flight to Egypt comes right after the top 10 Arab Countries, including Egypt, had a meeting with American diplomats in Jeddah, where they expressed support for the coalition against the Islamic State. The Arab League announced that their support of the coalition would have the goal of destroying the IS group regardless of its location and with any means necessary.

According to a statement for the Egyptian Daily, Sameh Shukri, Egyptian Foreign Minister, Egypt’s implication in the coalition does not necessarily mean that the country will be participating with troops or taking part in military action.

In the meantime, the U.S. refusal of including Iran or Syria in the coalition has brought Turkey’s refusal of joining in. The NATO member (Turkey) is refusing to adhere to the coalition after the two Arab countries that both view the Islamic State as a major threat were both denied partnership.

Relations between Egypt and the United States have been tense since July 2013, when President Mohammed Morsi was overthrown during massive protests. The U.S. harshly criticized Egypt’s handle on the situation, stating that the country must immediately go ahead with the democratic transition and respect human rights.

On Saturday, these concerns were raised and Kerry insisted that the United States will never trade any objective they might have for its concerns for human rights.

According to Shukri, the fight against terrorism is a responsibility that the entire international community has to bear.