You are here: Home / National News / Disagreements between U.S. Military and Obama Increase over Strategies of Defeating IS 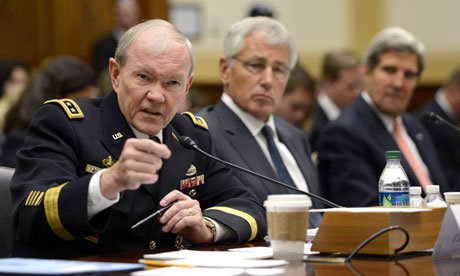 The rift is widening between President Barack Obama and U.S. military leaders in their quest of defeating the Islamic State. This is only the latest sign that shows the awkward and uneasy relationship in which our leaders find themselves.

After the House of Representatives passed a bill supporting the strategy to arm and train Syrian rebels, during the Senate voting on the same matter, military leaders harshly criticized the U.S. president for his approach in the Islamic State crisis.

Former Marine Gen. James Mattis, who had served under Obama’s administration last year, is only the latest skeptic to voice his concerns. He told the House Intelligence Committee that the president was trying the military’s hands by bluntly prohibiting any ground combat. According to Mattis, halfhearted efforts and airstrikes alone can actually backfire, strengthening the Islamic State’s credibility.

Mattis is the second to comment on president Obama’s approach after Army Gen. Martin Dempsey boldly took a stance in the matter two days ago. The chairman of the Joint Chiefs of Staff suggested that the United States revise its military policy concerning this conflict. He noted that while the president had no intention of seeing American boots on the ground, the possibility should not be ruled out. He went on to explain that in small contingents and with clear missions, circumstances might allow strategic deployments.

Army Gen. Lloyd Austin had already suggested that army forces be brought into enemy territory before Dempsey. The commander for the Middle East had asked the president to consider sending in ground troops after one battle in Iraq. He was, however, overruled.

In light of the many disagreements between Obama and military leaders, both the White House and the Pentagon have attempted to deny any claims that dissent might exist in the ranks. In some cases, their efforts have only managed to rally more attention on the issue.

Defense Secretary Chuck Hagel, for instance, reassured the House Armed Services Committee that military and civilian leaders were in complete alignment with the strategy proposed by our president. However, some of the members of the Armed Services Committee didn’t see it that way. The chairman, for instance, suggested that the U.S. president listen more closely to his military advisors. According to Howard P. McKeon, Obama’s military commanders are the best suited to offer him pertinent professional advice on the matter. He added that while the President has the last say and the largest responsibility, taking options off the table wasn’t the best suited approach.