You are here: Home / National News / Debbie Wasserman Schultz’s Reign of the DNC on the Wane 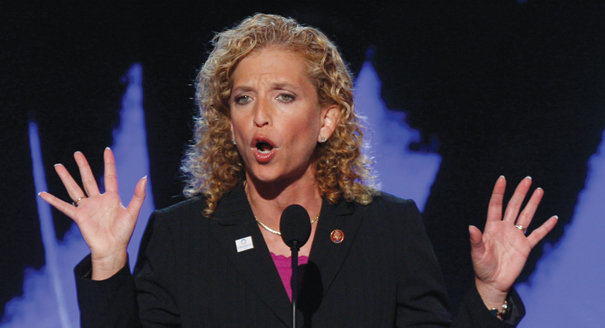 Democratic National Committee Chairwoman, Debbie Schultz, seems to have fallen very low and if Washington buzz has it correctly, how long will the chairwoman continue her reign of the DNC?

While we all new that Schultz was a bit overly ambitious and gaffe prone, wind of her unprofessional behavior and rudeness haven’t just reached Washington, no. Her behavior is now shared over Coffee in Capitol Hill.

And although this alone couldn’t be all that bad for the DNC chairwoman, it also seems that she has become a liability not just to the Democratic National Committee but also to herself. According to recent information, Schultz finds herself in a curious behind-the-scenes battle with not only Congressional Democrats and the White House, but has also managed to have Washington insiders lose confidence in her leadership abilities and her reliable party spokesperson qualities.

During a round table discussion in Milwaukee, in full view of cameras, Schultz said: “What Republican tea party extremists like Scott Walker (the Wisconsin Governor) are doing is they are grabbing us by the hair and pulling us back.”

As soon as Rebecca Keelfisch, Walker’s lieutenant Governor heard about this statement, she reacted immediately, accusing DWS of using domestic violence language in political disagreements. This caused countless women across the nation to become disgusted with the events, while Keelfisch was demanding that Mary Burke, denounce such outrageous statements.

Soon after, Burke’s press secretary issued a statement in which they suggested that Schultz had gone too far with her statements and that such language would never be used by Burke. She added that in spite of her disagreements with Governor Walker, issues can always be respectfully pointed out.

In the meantime, it seems that chairwoman Schultz is also no longer being invited to strategy meetings or other important get-togethers, in spite of the President’s apparent satisfaction with Schultz. Writes Dovere, for instance, a respected journalist covering the White House wrote in one of his articles that it was clear that the DNC chairwoman was no longer invited to strategy talks with the president and that she was clearly no longer wanted there.

Schultz’s behavior has been difficult from the get-go, as the chairwoman managed to not only upset Marlon Marshall and Buffy Wicks , some of Obama’s favorites, but also the U.S. president himself during the 2012 Charlotte Convention (she had asked her staff to explore possibilities of how she could maintain her chairwoman position if Obama had lost the elections).

Last but not least, highly demonstrative of her character were her actions during the 2008 elections when, despite being a co-chair of Clinton’s run, the now DNC chairwoman abandoned her colleagues during the final weeks to join the winning team (i.e. Obama’s team).

The question is what will happen to Schultz after midterms are over.