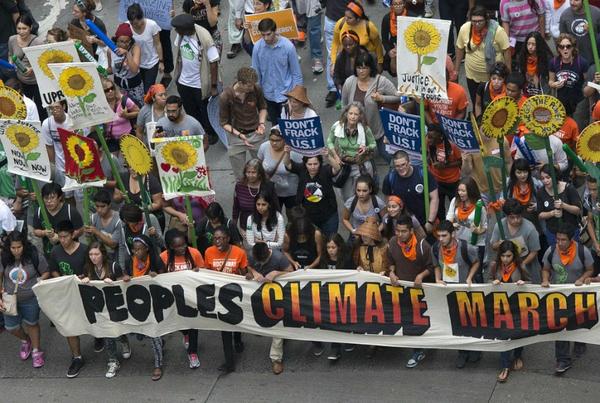 Around 300.000 people are marching in New York against climate change is what is believed to be the largest environmental protest in history. The two miles long ‘People’s Climate March’ took off at 11:30 AM. The event takes place while more than 100 world leaders gathered in New York under United Nations auspices to talk once again about our troubled future.

Another critical announcement makes the meeting even more important. The U.S. National Oceanic and Atmospheric Administration announced a couple of days ago that August 2014 was the warmest month to have ever been recorded.

Although political leaders produced unimpressive results each time they gathered to talk about climate change, activists have not lost hope that at one point politicians will take the necessary action to prevent further damage. Even if most countries pledged to cut carbon dioxide emissions, 2013 saw record pollution levels.

The top three polluters are China, India and the U.S. While president Obama will join the debates, neither China, nor India have sent political representatives to the gathering. Unfortunately, their absence decreases the chances of reaching a consensus regarding a vigorous plan to stop carbon emissions in the near future.

Protestors are as varied as the pollution sources. Anti-fracking groups march next to protestors against coal industries. High profile actors Leonardo di Caprio and Mark Ruffalo joined the protests. “I’m here primarily for my children. I want to see the leaders of the world hear the will of the people and begin to implement 100% renewable energy for 100% of the people,” said Ruffalo. Bill de Blasio, New York City mayor, pledged on Sunday to reduce the city’s carbon emissions by 80 until 2050.

Similar events took place in 166 countries. “In 2,500 marches from Paris to Bogota, we’ve blown past expected numbers. Climate change is not a green issue anymore, it’s an everybody issue,” said Richard Patel from Avaaz, the activist group who organized the protest.