You are here: Home / National News / British Ships Lost 160 Ago in Arctic Waters Discovered by Researchers 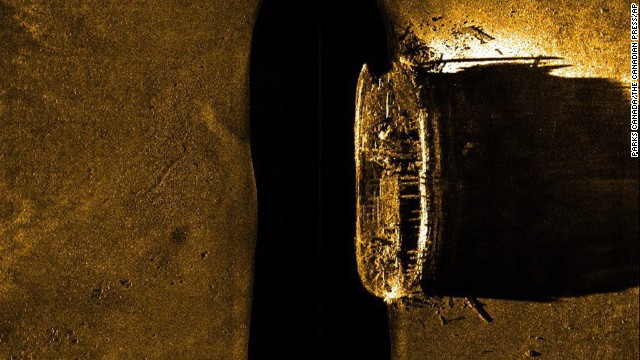 Almost 160 years, two British ships sailed towards the Arctic, in an attempt to map one area just above Canada. Unfortunately, the two ships disappeared and their loss has been a mystery ever since. The approximate locations of the two wrecks was unknown, but a recent Canadian expedition managed to locate one of the ships.

In 1845, Sir John Franklin, went in an expedition along with 129 men and two ships, HMS Erebus and HMS Terror, but no one ever heard from them again. His wife sent five ships to find him and even left cans of food on ice sheets, so he could eventually find them. Over 50 expeditions attempted to find out what happened to them. The hypothesis is that the ships got ice locked close to King Williams Island and the crew decided to abandon them. Stories from Inuits say that they resorted to cannibalism as a last hope of survival.

In the 1980s, three bodies were discovered. Because of the high lead levels discovered in the bodies, it was believed that improperly assembled cans ended up causing their deaths. However, another research indicates the ships pipe system as the origin of the increased lead level.

Thanks to global warming, the Northwest Passage has become accessible to ships. The Canadian Government wanted to clarify its sovereignty over it and started an expedition to find out once and for all what really happened to the ships and their crews. Due to technological improvements, the Canadian research team managed to discover one of the ships by using sonar images.

The British archaeologist, William Battersby boldly claimed this is “the biggest archaeological discovery the world has seen since the opening of Tutankhamun’s tomb almost 100 years ago,” the Franklin expedition expert said for BBC. Although the discovery is important, he does seem a bit overexcited.

This finding was obviously stimulated by political interest, although marine archeologists were highly interested in the discovery as well. “I am delighted to announce that this year’s Victoria Strait expedition has solved one of Canada’s greatest mysteries, with the discovery of one of the two ships belonging to the Franklin Expedition,” Prime Minister Stephen Harper said in a statement. “Finding the first vessel will no doubt provide the momentum – or wind in our sails – necessary to locate its sister ship and find out even more about what happened to the Franklin Expedition’s crew.”