If the so called ‘unauthorized’ tweet that was published from Gov. Perry’s account wasn’t proof enough that today’s politicians simply have no control over their social media accounts, Thursday prepared another surprise for enthusiasts.

Delaware Gov. Jack Markell tweeted a rather interesting message attached to a bondage picture on Thursday morning. His Tweet expressed his intention of visiting the Warner Elementary school, where he was about to announce a new initiative meant to support disadvantaged students. 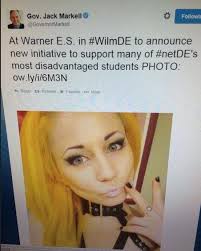 Gov. Markell’s tweet also included a picture of a rather beautiful young woman in bondage gear.

As soon as the Gov. (or his staff) noticed the confusion, the post was deleted. However, those paying attention had more than enough time to immortalize the now famous tweet.

While some of Gov. Markell’s followers were wondering whether the woman in the picture could have been a teacher from the elementary school, a second tweet soon addressed the situation. Gov. Markell apologized for what he described as an ‘inappropriate’ photo that had been sent out earlier without his knowledge. He added that his staff would investigate the situation and that he regrets having offended anyone.

This Twitter fiasco is only one event in a long series of social media staff bloopers. The latest victim, Gov. Rick Perry, claimed that an unauthorized tweet belittling district attorney Rosemary Lehmberg. However, many voices don’t buy the governor’s story, claiming that there is little possibility that someone could simply hack the politician’s account to post such a photograph. Gov. Perry, as Markell did, also deleted the picture.

In his tweet, Perry accused Lehmberg of not only driving under the influence but of indicting the governor after he vetoed the allocation of funds to the Travis County Public Integrity unit. He had demanded that district attorney Lehmberg resign after the scandal with the DUI charges.

Neither Markell’s nor Perry’s spokespeople made statements regarding the peculiar tweets.