You are here: Home / Business / Bill Passed to Avert Government Shutdown by U.S. House of Representatives 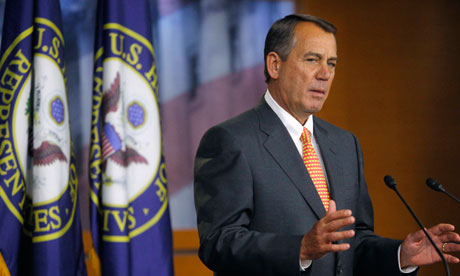 On Wednesday, lawmakers approved the stop-gap measure that prevents the October 1st shutdown of the government. The bill also allows the United States Export and Import Bank to continue operating for the next nine months.

The opposition was evenly distributed between the two Houses, and the measure was approved 319 to 108. This bill also contains a distinct authorization allowing the Defense Department to carry out training sessions and to moderately arm Syrian rebels in their fight against the Islamic State.

After having passed, the bill will continue to the Senate for approval on Thursday. It provides an extension in funding levels for several discretionary government programs and agencies. Lawmakers will have the possibility of sorting out a longer-term spending measure after mid-term elections are finished.

Harry Reid, Senate Majority Leader, said that a government shutdown is out of the question while opposing the Republican call for separate Senate voting on the rebel provision contained in the bill.

Additionally, the measure that just passed contains a stipulation providing $88 million to be used in the fight against Ebola. $58 million will be used to help ZMapp’s production of the experimental antiviral drug as well as two other vaccine producers. The remaining $30 million will go to the Centers for Disease control, to be used for staff and supplies.

The Democrat’s attempt of pushing a long-term extension for the Ex-Im Bank was rejected by the House of Representatives. Around $1.012 trillion will be considered discretionary spending while the Pentagon’s contingency budget allocated for war operations will not change ($85 billion annual rate). Obama had only requested $58,6 billion for the year 2015.

The bill allows that money be shifted towards Syrian rebels with special permissions from Congressional committees and also extends to the Internet Tax Freedom Act, which states that neither state or local governments may tax internet access.