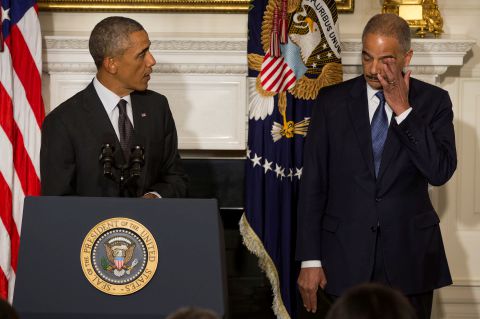 On Thursday, attorney general Eric Holder announced his formal resignation after a having been the head of the Department of Justice for six years.

He has agreed, however, to continue in his position until his successor is found.

During a press conference at the White House, Attorney General Eric Holder said that while his time at the Department of Justice had been the greatest honor of his professional life, he would be resigning from the post and leaving in the following months. Holder thanked President Obama for what he called a beautiful friendship.

“I will continue to serve and try to find ways to make our nation even more true to its founding ideals,”

President Barack Obama stood next to the Attorney General during his speech and applauded the first African-American to have served as attorney general. During his tenure at the Department of Justice, Holder made civil rights and equal rights central components of his work.

The President also added that during these 6 years when Holder was at the helm of the Department, hundreds of terrorism cases had been prosecuted, that corruption was rooted out and that violent crime was fought against.

Last but not least, President Obama highlighted that Attorney General Eric Holder managed to bring down crime and incarceration rates by 10% over this six year period.

Holder told reporters in a previous interview that the had not intended to remain in his position for the entire duration of Obama’s second term and that he was confident that this was an appropriate place for him to step down.

“I think I go out having accomplished a great deal in the areas that are of importance to me. I’m satisfied with the work we have done,”

The Attorney General also underlined the importance that the Department of Justice has in protecting voters’ rights as well as gay rights, in easing drug sentencing rules (which according to him disproportionately burden minorities) and in using criminal courts for terrorist suspect trials.

The President and Holder had discussed the Attorney general’s resignation multiple times during recent months, however, the plan was finalized over Labor Weekend, after an hour-long conversation at the White House.

Holder said that his love for the Department of Justice began when he was still a boy and was watching how it had played a key role in advancing the civil rights movement under the leadership of Attorney General Robert F. Kennedy. For the past 6 years, Holder had a portrait of Kennedy in his conference room.