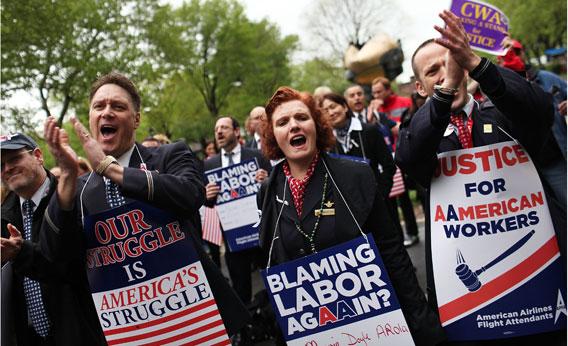 Labor organizers have described Tuesday’s vote as an epic win in the South as reservation agents at American Airlines requested union representation. Their actions helped form a powerful bargaining unit consisting of over 14,500 employees from both the Texas-based Airline and the U.S. Airways, after the merge that took place earlier this year, when U.S. Airways took on American’s name.

Now, reservation and airport agents will have representation from the Communications Workers of America Teamsters Association.

After Tuesday’s win, the CWA said that the Airline employees had managed to seize “the largest labor organizing victory in the South in decades.”

Richard Trumka, AFL-CIO President, noted that such a significant step forward should not be easily overseen, especially since it shows that the right to a voice at work isn’t geographically confined. According to him, this win will cause the energizing of other similar efforts in the South.

86 percent of the 9,000 American Airlines service agents voted in favor of union representation.

This win comes in contrast to the United Auto Workers loss in a difficult unionization vote in the Volkswagen factory in Chattanooga.

However, despite such significant wins, unions still have to fight significant headwinds all over the United States, such as prolonged slide in membership as well as harsh and hostile laws passed in states such as Wisconsin, which were once-friendly states.

“We have been the odd employees out for so long, because we were the only employees without union representation,” Carroll Locklear, Texas reservation agent, stated. According to her, management will now no longer be able to simply take what they want, so employees feel they are in a win-win situation.

On the other hand, American Airlines seemed prepared to work together with the union, and as Paul Flaningan, airline spokesman states, the company will now be discussing joint collective bargaining agreements with their three workgroups, now represented by unions.