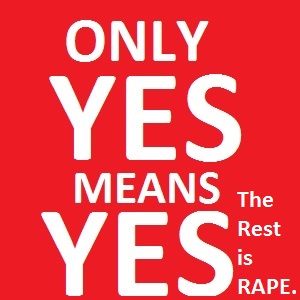 Californian lawmakers passed a law on Thursday that requires universities to adopt “affirmative consent” language in their definitions of consensual sex, as a part of a nationwide initiative to curb sexual assault on U.S. campuses. The measure has been called the “yes-means-yes” bill, and it defines sexual consent between people as “an affirmative, conscious and voluntary agreement to engage in sexual activity”.

Instead of “no means no, ” the phrase commonly associated with sexual assault prevention, the law, if adopted officially, would require affirmative responses by each party in order to further engage in sexual activity. It’s up to Gov. Jerry Brown (D) to sign the bill into law or not. He’s entitled to think it over until the end of September. The state Senate unanimously approved this legislation Thursday.

“With this measure, we will lead the nation in bringing standards and protocols across the board so we can create an environment that’s healthy, that’s conducive for all students, not just for women, but for young men as well too, so young men can develop healthy patterns and boundaries as they age with the opposite sex,” Sen. Kevin de Leon of Los Angeles, a Democrat who pushed the bill said.

In a nutshell the action came as the state legislature rushed toward scheduled adjournment, and as universities around the country are under pressure to improve handling of allegations of sexual assault. Some critics of the bill say the legislation is overreaching and sends universities into murky, unfamiliar legal waters.

This bill comes as a consequence of mounting pressure nationwide by lawmakers, activists and students of universities and colleges to curb sexual assaults on campuses and to reform investigations after allegations are made.

Note that the White House has actually declared sex crimes to be “epidemic” on U.S. college campuses, with one in five students falling victim to sex assault during their college years.

“These are our daughters, they are our sisters, they are our nieces,” said Sen. Kevin de León (D-Los Angeles). “It is incumbent on men, in particular, to step up and to stand up and to do everything possible to change that culture — a culture that’s quite pervasive on our college campus. That is a rape culture.”

Back in May, the U.S. Department of Education released a list of 55 colleges under investigation to determine whether their handling of sex assaults and harassment violated the federal laws meant to ensure equal treatment in higher education.