Blazing temperatures and severe drought conditions have created the perfect conditions for wildfires. They are now spreading uncontrolled in California and Oregon. More than a dozen of them have determined Gov. Jerry Brown to issue state of emergency over the weekend. For local and state agencies that are responding to fires, this means reimbursements. 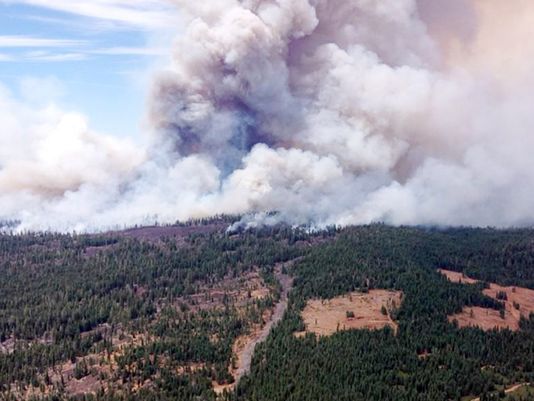 At present, the wildfires have scorched over 32 square miles of land, across 2 states. Hundreds of buildings are still at risk. On a more optimistic note, Gov. Jerry Brown managed to secure 75% of the costs required to fight the fires which started in Oregon and spread to California.

As we speak, thousands of acres are being devoured by the fires, and firefighters can no longer control the situation. They are receiving assistance from the 146th Airlift Wing of the Air National Guard. On Saturday, 2 C-130J military aircrafts landed at McClellan Airfield.

“This particular airplane drops between 3,000 gallons of retardant and the airplane is also used for every other air force mission that can be imagined,” – Wing pilot Lt. Col. Bill Wilson

The ground crews have been working day and night on the fire burning in Modoc County, which has managed to destroy approximately 19 square miles. It threatens over 200 buildings, but aerial help has slowed the fire’s advance. At the moment it is 25% contained.

“We put two loads of retardant on it (…) It’s currently burning to the southeast and we protected a town to the north.”

Addition teams will be joining the fight against the fires which started last week. Although the situation seems dire right now, Wilson trusts nature. Wildfires are a regular occurrence in the state, especially during the dry season.

“It’s essentially a predictable fire season today (…) but tomorrow, that may change very rapidly, so mother nature has a tendency to have her own design on how she wants to start fires, and most of these fires were started by lightning strikes.”

There has been news about another fire in the region, which quadrupled in size in the weekend. It has single-handedly destroyed eight houses, and led to the evacuation of a small care hospital.

In addition to this, Linda Tiffin, from the U.S. Forest Service, stated that the fire burning in and around the Lassen National Forest also destroyed 36 square miles of land (a day earlier it only claimed 11 square miles). This fire, which was named the Eller Fire, began on Thursday, and it still hasn’t been contained.

In light of this news, officials from the Mayer Memorial Hospital decided to evacuate their 49-bed annex to the hospital in Redding, to avoid the flames.

Residents of three more communities have been ordered to evacuate. We can only hope that reinforcements will prove useful in the fight against wildfires.