A U.N.-backed war crimes tribunal on Thursday found two senior surviving leaders of the Khmer Rouge regime guilty of crimes against humanity and sentenced them to life in prison.

The war crimes charges were applied for their roles during the Cambodia’s 1970s terror. The verdicts were announced against Khieu Samphan, the regime’s 83-year-old former head of state, as well as against Nuon Chea, its 88-year-old chief ideologue. They are the only surviving leaders still alive.

Nuon Chea, who is in a wheel chair, but wearing dark sunglasses, was so weak that he wasn’t even able to stand up for the verdict. 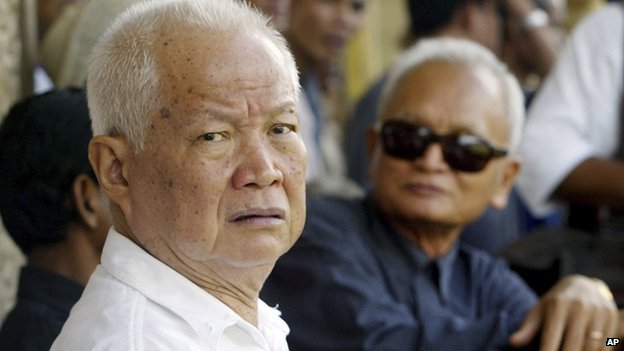 Both of the accused have denied their ever doing wrong things. Nevertheless Nil Nonn told the court that “given the gravity of the crimes” both were to remain in detention.

The Khmer Rouge era lasted between 1975 and 1979, a period during which at least 1.7 million people died of a combination between starvation, medical neglect, overwork and execution.

During four years, the Khmer Rouge killed all those perceived as enemies, such as intellectuals, minorities, former officials and their families. The regime sought to create an agrarian society, something based on a Marxist doctrine, where cities were emptied and their residents forced to work on rural co-operatives. Many worked to death while others starved to death.

Lawyers for the two sentenced former leaders said they would appeal against the ruling. “It is unjust for my client. He did not know or commit many of these crimes,” Son Arun, a lawyer for Nuon Chea, told journalists. There was no visible reaction from either of the accused whatsoever.

Survivors of the regime traveled from across the country to witness the historic day, filling several hundred seats available to the public at the tribunal.

“The crimes are huge, and just sentencing them to life in jail is not fair,’ said 54-year-old Chea Sophon, who spent years in hard labor camps working in rice fields. His brother was killed during the Khmer Rouge era. “But what can I do? I just accept the verdict,” he said. “Even if they die many times over, it would not be enough.”

Set up in 2006, the court has prosecuted just one person so far, Kaing Guek Eav, a lower-ranking Khmer Rouge commander who was found guilty in 2010 and sentenced to life in prison.