You are here: Home / National News / Veteran Bill Law Was Signed Into Law by Obama

Thursday saw another bill come into law when President Barack Obama signed the Veteran bill that would overhaul the Department of Veterans Affairs. Today’s signing amounted to a unique moment of bipartisanship in the congressional gridlock. 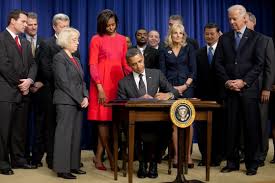 According to President Obama, the bill could only pass due to bipartisan majorities and such a situation doesn’t occur often in Congress. During the signing, President Obama joked with members of Congress and said they should have more bills sent to him to be signed (digging at the congressional gridlock).

President Obama is confident that the current bill is the first step towards fixing problems at the VA, although there is still much to be done. He insisted that veteran homelessness is something that needs to be dealt with, along with the backlog of VA disability claims that needs to be eliminated and the countless veterans that need assistance in finding jobs. He also reminded the Senate that there are many nominees for senior VA posts who are both ready to serve and highly qualified.

The bill was written due to several allegations that veterans died while waiting for health care. These allegations generated such outrage that the McDonald’s predecessor, Eric Shinseki, decided to resign. Although there were moments when the bill was a step away from breaking, lawmakers on Capitol Hill finally found the compromise that would allow for the bill to be signed.

After the $16 billion measure passed, VA secretaries will have an easier time firing or demoting officials who are accused of mismanagement. This idea came as a response to the allegation that VA officials had falsified records to falsely prove that they had met the agency goals for care providing. Additionally, the bill permits VA clinics to hire sufficient health care providers as well as allowing veterans to seek medical care outside the VA health system.

Obama insisted that America has a responsibility of doing right by those who have served under the American flag and that the current bill will be the first step towards a fair and better system for our veterans.