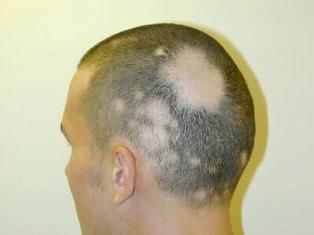 A small study whose findings have been made public, revealed that a drug that was used to treat a unusual form of leukemia had the peculiar side effect of reversing hair loss caused by alopecia. The study was published on Sunday, in the Nature Medicine journal.

The drug in question is called ruxolitinib and it helps treat the inflammation that is caused by the disease. Apparently, it also helped three of the people suffering from leukemia and alopecia regrow their hair back within five months.

We still need to do more testing to establish that ruxolitinib should be used in alopecia. But this is exciting news for patients and their physicians.

Clynes is also director of the Columbia Center for Translational Immunology at Columbia University in New York City.

Alopecia needs to be distinguishes from male pattern baldness, which has its roots in genetic causes, as well as hormonal ones. Alopecia is an autoimmune disease that causes hair loss in patches.

The scientists don’t know yet if the drug can be used to treat other types of hair loss and it is still a long way before being put on the market and used as a treatment for alopecia. Further studies are needed to ensure this good side-effect will still happen.

It’s not the first time, nor will it be the last, when a drug meant to treat something, ends up treating something completely different. The most famous similar case lead to the discovery of Viagra; the drug was being tested as a heart issue drug and it ended up being the most famous erectile dysfunction medicine in the world.

Unfortunately we are still a long way before treating hair loss and baldness. It’s mainly because forcing human hair to grow is very difficult. In 2011, researchers at the University of California found that mice that lost their hair due to stress, could be cured of baldness if injected with a drug that blocked the factor which released the stress hormones. It was an accidental discovery and there is no guarantee that it will work on humans.

What are your thoughts on this matter? Are you suffering from alopecia or you know someone who is? Share your comments with us in the section below, we would love to hear what you have to say about this.