You are here: Home / National News / Separatist-held City of Donetsk under Shell Fire as Russian Convoys Head for the Border

As Russian aid convoys were on their way to the border, the city of Donetsk found itself hit by artillery shells on Thursday. During the attacks, at least one person was killed.

While the Ukrainian government is making life more difficult for pro-Russian separatists, citizens of Ukraine are being caught in the crossfire. Frightened residents began running for cover as shelling rocked the city of Donetsk.

It isn’t yet clear if the attack originated from rebel forces or if the Ukrainian government fired the artillery.

One of the city’s main hotels, Park Inn Radisson, was where the shells landed. In spite of them landing 200 meters away from the hotel, its windows shattered. Additionally, a hole was left on the third floor of a nearby apartment block as well as a crater on the pavement. 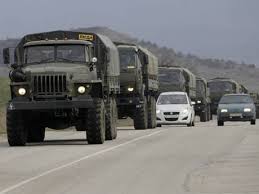 Meanwhile, a humanitarian aid truck transporting baby food, water and other items was driving through southern Russia towards the frontier. Kiev instructed the convoy not to cross the border until authorities had had the opportunity of clearing its cargo.

This Russian caravan was comprised of 280 trucks and had been intended to reach Luhansk, a region in eastern Ukraine, where separatist forces are holding the main city.

Ukrainian authorities have described this dispatch of aid as an act of cynicism on Russia’s part since the entire humanitarian crisis arose partly because of Russia’s interference.

As a response to the allegations that it could have supplied Ukrainian rebels with missiles, tanks and other military equipment, Moscow denied all accusations and insisted that suggestions that the current convoy could be a cover for invasion was absurd.

Spokespeople from the International Committee of the Red Cross (who are normally responsible for distributing humanitarian aid in Ukraine) said that matters of border crossing procedures and custom clearance must be clarified between Russia and Ukraine.

Valery Chaly, a senior Ukrainian presidential aide, explained that Ukraine would not permit that accompanying escorts for the Russian convoy be allowed entrance on Ukrainian territory. Any attempts of sending in so-called peacekeepers should be abandoned according to the aide, who also explained that the Russian cargo could be taken into the country I and when the Red Cross escort the goods and if all customs formalities are completed.

Military spokesman Andriy Lysenko said that if the Russian convoy must pass through rebel-controlled territories, it must be handed in to Red Cross representatives and must undergo Ukrainian border inspections to make sure that everything is in order.