You are here: Home / National News / Russian Aid Trucks Already on their Way out of Ukraine

Over two hundred humanitarian aid trucks are returning to Russia after entering the rebel-held eastern Ukraine region on Friday. Russia highlighted the dire need of citizens living in this area for humanitarian aid after their homes and livelihoods had been destroyed during the long months of fighting.

The only problem with this seemingly altruistic picture is the fact that the Russian convoy entered Ukraine without a formal approval from the Ukrainian government, in an area where the border was under pro-Russian rebel control. Russia claimed that it had lost patience with Ukraine’s delay tactics and insisted that it would be driving the aid trucks into Luhansk. Ukraine soon after described this move as an invasion. 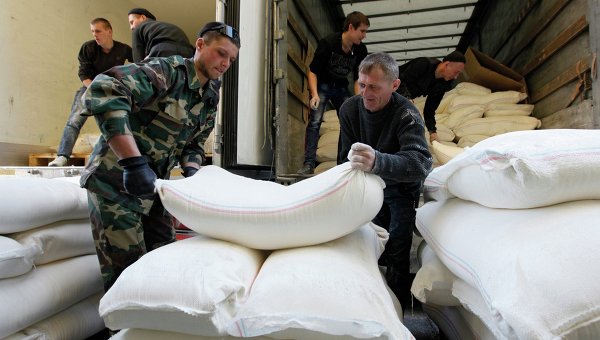 In the meantime, a meeting between the Russian and Ukrainian presidents is scheduled for Tuesday. Before these talks, German Chancellor Angela Merkel held meetings with several Ukrainian officials in Kiev and insisted that both sides seek a peaceful solution that would spare their citizens more bloodshed (over 2,000 lives were lost during this bloody conflict).

The Russian aid trucks that had crossed the border on Friday (after a brisk inspection by separatist rebels at the checkpoint that was under rebel control) already returned to Russia on Saturday afternoon. According to a Russian emergency official, 227 vehicles had taken part in the humanitarian aid transport.

Reporters on the Ukrainian side of the border reported that they had the chance of looking inside 40 tractor-trailers and said that they had been emptied.

Russian officials assured Ukraine that the trucks only carried food, water, sleeping bags and generators meant to help the people in Luhansk. Other countries (Ukraine, the U.S. and many European Union countries) aren’t so convinced, however, and accused Russia of violating Ukraine’s sovereignty.

Western countries as well as Ukraine suggested that the trucks (which had been only briefly inspected, by separatist rebels) could have smuggled supplies, weapons and reinforcements to pro-Russian separatists.

There is still no certainty as to what the Russian trucks had transported since they were unloaded in a matter of hours.

Apart from Luhansk, there are countless towns whose citizens were caught in the siege between rebels and government forces. In such cities, a one-time delivery of goods will simply not suffice, as these people lost everything during the artillery strikes.

Valerie Amos, U.N. emergency assistance representatives, explained that there are many areas in the eastern parts of Ukraine where rebuilding the livelihoods of citizens who were caught in the crossfire is particularly difficult because of ongoing fighting.