You are here: Home / National News / Russia Denies That Its Vehicles Were Destroyed in Ukraine

According to NATO, a Russian military convoy had crossed overnight into Ukraine and was destroyed by Ukrainian forces. Moscow, however, denies all these allegations. These reports have caused concerns over the Russian convoy that set off towards Ukraine from Moscow on Thursday.

The humanitarian aid convoy that is set for eastern Ukraine is still a source of tension, more now that military vehicles were intercepted. Not only Kiev, but also Western countries are now suspicious that the aid mission is in fact only a pretext so that Russia can enter eastern Ukraine where pro-Russian separatists are fighting intense battles against the government. 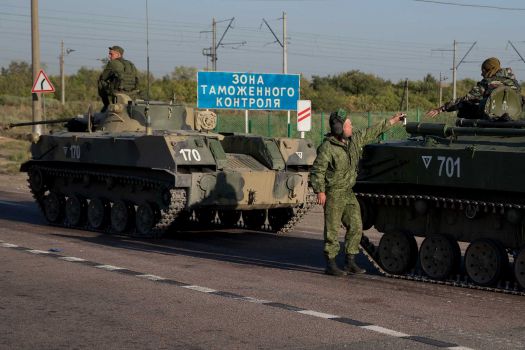 Since April, when the conflict began, Russia has kept denying that it has any involvement in the situation, but there have been consistent allegations that Moscow has been directing the rebellion.

While the aid convoy could just be meant as a message that Russia does, in fact, want to cool the conflict, many believe that this is not the whole truth. Vladimir Putin stated during a speech on Thursday that Russia hopes that peace will finally come in Ukraine, but such a statement obviously clashes with Russia’s actions of sending military convoys into Ukraine while the world’s attention was being drawn by the aid convoys.

Russian Defense Ministry spokespeople insisted that no Russian military vehicles had been intercepted or destroyed by Ukrainian forces. They went on to say that there were no military convoys that crossed into Ukraine in the first place.

Reportedly, the military convoy crossed into Ukraine near the Russian town where the humanitarian aid convoy parked and awaited inspection. After several days of controversy, Russia finally agreed that the goods contained in the vehicles be distributed by the Red Cross and allowed its convoy to be inspected.

According to the Red Cross, the plan is that the vehicles would have only one Russian driver that would be accompanied by a Red Cross worker. Additionally, no military escort would be allowed. Moscow, however, is still considering a military escort.

Other aid missions are already underway. Ukraine sent goods to the Luhansk area, where trucks were unloaded in Starobilsk on Friday. The Red Cross will be transporting them further.

Lysychansk, another Ukrainian town, also received aid recently. As emergency workers were distributing the goods, children and older women appeared on the streets and told them that their help was the first they had received since the fighting had ended.

Around 2,100 lives were lost during the fighting in eastern Ukraine, and half of those deaths happened over the last few weeks.