You are here: Home / Health / Quarantines to be Instated for Returning Missionaries from Africa

Desires to stop the deadly disease from spreading have forced health officials to quarantine missionaries that are returning from Africa. Consequently, the two missionary organizations (SIM USA and Samaritan’s Purse) will be quarantined as soon as they return from Africa, as a precautionary measure.

Health officials have ensured the public that such measures are just due to an abundance of caution and not because there are cases of Ebola anywhere in North Carolina. 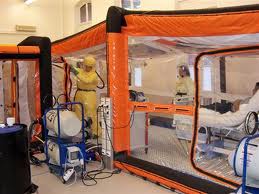 Dr. Stephen Keener, medical director at the Mecklenburg County Hospital in North Carolina, assured the public that there are no suspected cases of Ebola in spite of the fact that David Writebol, the husband of the missionary who was infected with the Ebola virus, is currently under quarantine. He visited his wife while she was in Liberia.

Dr. Keener noted that a quarantine is just a measure to ensure that healthy individuals who were exposed to a certain disease are removed from healthy contacts until it can be established that they were not infected.

Current quarantine measures require that people who have been in contact with the disease remain for three weeks under quarantine. The virus is gaining momentum and after it killed more than 1,000 people in West Africa, it has now reached the Nigerian city of Lagos where 10 cases were confirmed.

Epidemiologists explain that the longest possible incubation time for the disease is 21 days and as such, the quarantine must last at least 3 weeks. Once they arrive, missionaries will be taken to Charlotte to begin the quarantine period.

Health officials have not released the exact number of missionaries who are going to enter quarantine for the next 3 weeks, how they will be traveling from Africa or when they will be arriving. They will also have the support of Charlotte Douglas International Airport who will fully cooperate to bring the missionaries back home.

They added that the volunteers will be arriving in an undisclosed, private area, so that passengers can safely and privately be brought to quarantine.

Keener also added that there is a great difference between the two groups of missionaries that have returned last week (last week’s group had no direct contact with Ebola virus patients so that they aren’t required to be put under official quarantine).

Health officials have asked them, however, to remain available so that if it is needed, they indeed undergo the 21 days of quarantine for the sake of public health.