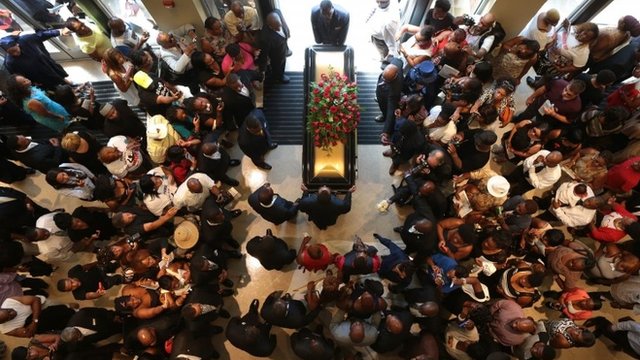 As far as his death is concerned, some witnesses claim the teenager assaulted the officer at the outset and tried to grab his gun, while other witnesses say Wilson was the aggressor. All accounts agree that Brown ran and then turned back.

In the meantime, a new audiotape that supposedly contains the sounds of shots fired by the Ferguson police officer Darren Wilson at Michael Brown is raising new questions. The audio recording indicates two distinct volleys of shots. Ten or 11 shots can be heard with a pause between the sixth shot and shots that followed. Forensic audio expert Paul Ginsberg analyzed the recording and said he detected at least 10 gunshots a cluster of six, followed by other four.

“I was very concerned about that pause … because it’s not just the number of gunshots, it’s how they’re fired,” the man’s attorney, Lopa Blumenthal, told CNN’s Don Lemon. “And that has a huge relevance on how this case might finally end up.”

The Brown killing set off days of chaotic demonstrations in Ferguson and a series of organized protests throughout the U.S. by folks who have grown tired of the bully tactics of law enforcers particularly against Black youths.

The crowd at Brown’s funeral included the parents of Trayvon Martin, the unarmed 17-year-old African-American fatally shot by a neighborhood-watch volunteer in Florida, along with a cousin of Emmett Till, a 14-year-old murdered by several white men while visiting Mississippi in 1955. Till’s killing galvanized the civil-rights movement.

In spite of praises, on the day of Brown’s funeral, The New York Times published a 1,500-word piece that aimed to paint Brown as a young man “grappling with problems and promise.” Kansas City-based correspondent for the Times, described Brown in the fifth paragraph of his story, as “no angel, with public records and interviews with friends and family revealing both problems and promise in his young life.” However both articles unleashed a torrent of criticism.