In Burney, California, a couple of wildfires have been blazing through the community without restraint. The pair of wildfires is about 8 miles apart and is currently still going strong in the northeast of California. Federal firefighters have been trying to put them out ever since Sunday, but have failed to do so and one of the wildfires has destroyed eight homes and has caused precautionary evacuations of a hospital.

The two wildfires are among 14 that are presently burning in the state of California. They started in Lassen National Forest within a day of each other and they have expanded into private property, managing to destroy 39 square miles on Saturday and 95 square miles of land on Sunday.

The larger wildfire was threatening the town of Burney and to avoid any tragic events, the town officials have decided to evict the 49-bed annex of Mayer Memorial Hospital for patients with dementia and other conditions with reduced motility. All the patients were moved into a Redding hospital, 55 miles away from Burney.

The city of Burney was put on evacuation watch by the Shasta County Sheriff, after he had ordered the residents of three quite small communities around Burney to leave their homes on Saturday night. 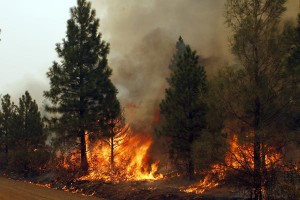 When asked about how big the danger was, the State Department of Forestry and Fire Protection said that more than 700 residencies were under the direct threat of the wildfire. There still aren’t any accurate and complete data about the number of homes affected by the wildfire, said Sgt. John Greene, because the area is not very populated and the majority of the homes in the area are vacation homes.

The two wildfires have managed to consume more than 183 square miles of brush and timber, Department of Forestry and Fire Protection spokesperson Dennis Mathisen declared. He added that:

Today we are looking at slightly cooler temperatures, but Northern California continues to be hot and dry and breezy in some areas, and in fact we are looking at a fire weather watch going into effect Monday morning for a large portion of Northern and northeast California and possible thunderstorms, which could mean more lightning.

The large number of fires in California forced California Gov. Jerry Brown to declare a state of emergency. He also added that the magnitude of all the fires is beyond any control of the local government. Only with the help of combined forces of the regions, can the wildfires be extinguished.

We will keep you posted about the state of the wildfires. What are your thoughts on these situations? Share them with us in the comment section below.