You are here: Home / National News / No. 1 Party School in the U.S. Revealed

Did you ever wonder which the most fun school in the U.S. was? If you have then we’ll give you the answer to that question right now: it’s Syracuse University! The Princeton Review declared today that Syracuse University is number 1 on the party schools list, after the release of a nationwide survey in which 130,000 students voted.

Syracuse University appears to be well ranked in other areas, as well: it ranked second best among around 400 colleges surveyed, the sport scene ranked third.

Syracuse University released a statement in which it said:

We do not aspire to be a party school. Our long-established reputation for academic excellence with programs that are recognized nationally and internationally as the best in their fields.

The officials from the University were also disappointed by the school’s feature in the 2015 edition of The Best 379 Colleges. This book contains 62 top-20 lists compiled after student reviews of professors, athletic facilities, food and financial aid awards, among others. 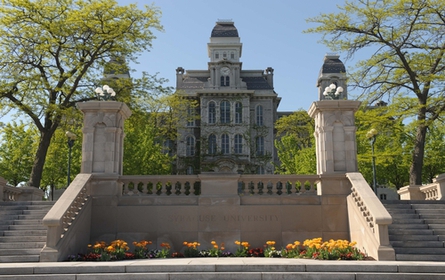 The most stone-cold sober university in the United States is Brigham Young Univesity in Provo, Utah, according to the list. Around 350 students in each campus were asked 80 questions about their schools and themselves.

Colgate University topped the list of most beautiful campuses, while the University of Chicago had the best college library. The best campus food can be found at the Virginia Tech dining hall, according to the review.

Robert, Franek, who is a Princeton Review senior vice president commented on this year’s review:

Our purpose is not to crown one college ‘best’ overall or to rank these distinctive schools 1 to 379 on any single topic. We present our 62 ranking lists to give applicants the broader base of campus feedback to choose the college that’s best for them.

The best career services are offered at the Northeastern University in Boston, Oregon’s Reed College has the best professors and Vanderbilt University in Tennessee has the happiest students in America.

What are your thoughts on this? Have you attended a fun university or would you want to? Do you think that should be a criterion when choosing a university? Share your comments with us in the section below, we would love to hear what you think about this.