In the wake of Kevin Ward Jr.’s unfortunate death, NASCAR announced a new rule regarding driver behavior. Tony Stewart was involved in an accident that lead to the death of Kevin Ward, a young driver. This event has prompted NASCAR to create a new caution rule, which was distributed to drivers before the Sprint Cup practice on Friday. 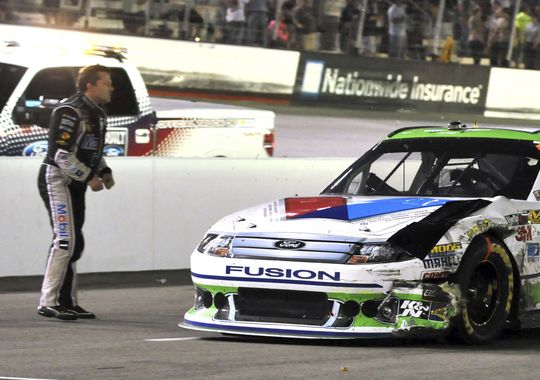 According to it, if a driver’s car was involved in an accident and it stopped near the racing surface the driver must first shut off the car and lower the window net if he was not injured. Afterwards he must wait for instructions from NASCAR officials or safety personnel. After exiting the car he must proceed directly to the ambulance or appointed vehicle, without coming closer to the racing surface.

NASCAR officials did not mention any specific punishments for drivers that choose to disobey the rule. The only information mentioned in the bulletin was:

“as with other behavioral infractions, NASCAR will handle each instance separately when assessing potential penalties.”

Pemberton says that this is a behavioral-type thing and it will be addressed “according to each situation”. It is highly likely that Ward was hit because he exited the car and decided to confront Stewart on the racing track. This is not the first time that a driver exhibits aggressive behavior during a race, nor is it the first time that NASCAR makes rule changes based on a fatal accident.

“As we’ve demonstrated in our history, we’re willing to react quickly to different incidents,

After NASCAR announced its rule which prohibits drivers from exiting their car under caution, many drivers reacted. Roush Fenway Racing’s Carl Edwards believes that the tragic death of Kevin Ward Jr. will represent a turning point for many drivers, and it will encourage them to act with more caution in the future.

With the formalization of the new guidelines drivers will also have more incentive to remain stationary in the event of an accident. NASCAR has always told drivers to remain stationary after a crash, but they now specify that drivers should head directly to an ambulance.

“I’m sure every one of us has at least one time in our careers where we have done something on the race track or when we get out of the car, we look back and think we should have thought twice about it,” – Chip Ganassi Racing Rookie, Kyle Larson

The only real concern now is if the new rule will inhibit the entertainment component of races. Drivers like Matt Kenseth and Jeff Burton appreciate that NASCAR wants safety to be on the forefront.

“I think that safety overrides entertainment.”

Jeff Gordon also wondered if this would have an impact on driver behavior and added that he will try to keep his emotions in check.

“I think that NASCAR has made the right move in redefining or better explaining; even making consequences for, letting emotions getting the best of you as a race car driver. – Jimmie Johnson