You are here: Home / National News / MMA Fighter hunted by Police for Savagely Beating his Girlfriend

Jon Koppenhaver, a cage-fighter whose stage name is War Machine, has a violent history and on Friday he attacked and beat Christy Mack. He was jailed for one year for assault, after a fight that started in a San Diego nightclub in the year 2010.

The Las Vegas Police believe the abuser is heading to San Diego, but three days have passed since the abuse and there are still no news about his whereabouts. Jon Koppenhaver rose to fame after his appearance on the reality show The Ultimate Fighter in 2007. 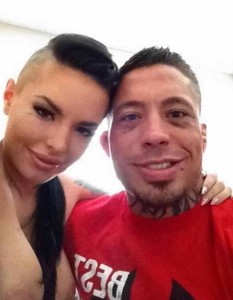 Because social media is so present these days, Jon Koppenhaver did something that surprised many: he started tweeting, while in hiding, about the abuse. The tweets were later deleted; he was describing how he came home to surprise his girlfriend, Christy Mack, and propose, but instead he was the one who was surprised.

He later expressed remorse at having entered the room, and not beating Mack.

The cops will never give me fair play, never believe me. Still deciding what to do but at the end of the day it’s all just heart breaking. […] I only wish that man hadn’t been there and that Christy & I would behappily engaged.I don’t know y I’m so cursed.One day truth will come out.

Christy Mack’s wounds inflicted on her were severe, but non-life threatening. She used Twitter and said: I will be releasing my statement in the morning to put many rumors to rest. She continued to state that the cheating rumors were not a fact. It appears that this was not the only time Koppenhaver abused her, because in November she wrote: He full on beat the s- out of me, couldn’t show my face in public beating.