You are here: Home / Business / McDonald’s Shares under Pressure while Investors Lose their Appetite

After the food safety scare in China, McDonald’s shares seem to not be recovering from the fallout that the incident has caused.

According to an undercover report, there were serious food safety lapses in Shanghai Husi as employees were re-labeling expired meat.

Consequently, McDonalds experienced a serious fall in share prices. On Friday, they reported that markets in the Middle East, Africa and the Asia Pacific had fallen 7.3 per cent. This drop is worse than the 0.2 percent that Wall Street had expected. And while this division only makes up for 10 percent of McDonald’s overall sales, the U.S. division couldn’t compensate as it too did not fare better. Same-store sales in the U.S. were down 3.2 percent compared to those from 2013. 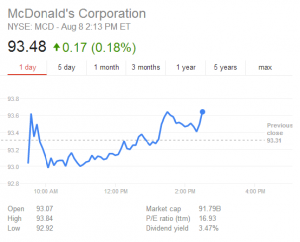 These figures only show the difficulties that low-income consumers are facing as they struggle to recover from the financial crisis. As such, McDonald’s could already report, for the first time since 2002, a first full-year of same-store sales declines, according to Mark Kalinowski, an analyst at Janney Montgomery Scott.

McDonald’s shares are currently $93.48, which is a 4 percent loss this year as compared to the Russell 300 Restaurant Index which has only fallen 3 percent over the same period.

As opposed to McDonalds, Gap experienced same-store sales that were way ahead of Wall-Street forecasts. They actually achieved a same-store sale rise of 2 percent (while forecasts only expected a 0.5 percent gain). As a result, Gap hopes to earn anywhere between 68 and 69 cents per share during the second quarter. Ike Boruchow, with Sterne Agee, explained that Gap had achieved its second best performance in 2014 after it improved its brand (in spite of remaining negative, there is significant improvement from -7 percent to -2 percent).

Other companies also experienced increases: Nvidia rose 8 percent while Monster Beverage Corp’s shares rose 6.1 percent.  Zynga shares, however, experienced a significant decrease- they reached a 14-month low when after a 6 percent drop, they reached $2.74. In fact, Zynga’s price has been steadily dropping since March (when shares were $5.50) to under $3 in August.