You are here: Home / Health / McDonald’s Will Resume its Full Menu in China Later this Week

Approximately two weeks ago, McDonald’s Corp pulled its items (including chicken burgers and beef) after its supplier was probed for using expired meat. They had to withdraw pork, chicken and beef items from China restaurants after a Shanghai television showed proof of its long-term supplier, the OSI Group LLC, using other dates for expired meat on products. The company waited for a while, but recent news states that it will be resuming its full menu in major Chinese cities. 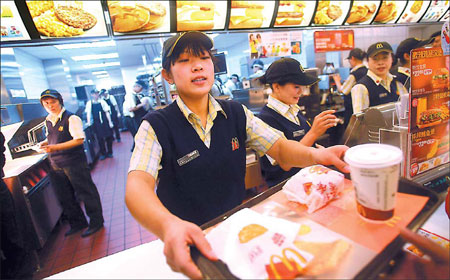 This means that McDonald’s enthusiasts from cities like Guangzhou and Beijing can enjoy their fast-food starting later this week. Oak Brook, Illinois-based McDonald’s declared that the Chinese restaurants will resume normal activity but he did not say when this will happen, nor did he mention the number of cities where the food will become available again. At the moment, McDonald’s is ordering more from suppliers in China, and exploring other suppliers in the area.

Aurora, an Illinois-based OSI which supplied vital ingredients for restaurants like Papa John’s and Yum! has also pulled its products made by Shanghai Husi. They replaced the management team in the country after they were investigated. Six executives from Shanghai Husi were arrested according to Bhai Shaokang of the Xinhua News Agency.

In other news, there are no Big Macs avaialable in Beijing restaurants. As a matter of fact, there is a limited number of burgers being sold, because McDonald’s has specific delivery services. As far as Hong Kong is concerned, a larger variety of products (including the Big Mac and McChicken burgers are available), because they managed to secure lettuce and onion from Taiwan and the United States. Supplies from Shanghai Husi in the Hong Kong were halted late last month.

Fresh products required for Chicken Mcnuggets, salads and fresh lemon team were supplied by the OSI’s Chinese Units in Guanghzou and Hebei. They are still not available, says the Hong Kong chain.

At the moment McDonald’s is trying to find credible suppliers, and it increasing orders from McKey Food Services, a Shenzhen unit of Keystone Foods. The company will probably search for fresh ingredients suppliers within China.

As a result of the food Scandal, Yum! and Burger King have cot ties with OSI. On the other hand, McDonald’s will continue to use food from OSI’s other operations.

This was a devastating blow for McDonald’s, which is currently the second-largest fast-food chain in the country (only surpassed by Kentucky-based Yum!). This incident renews the fears of Chinese residents over unsafe products in their country. China plans to ease these concerns by drafting a new set of laws that will result in increased scrutiny over the industry and worse penalties.