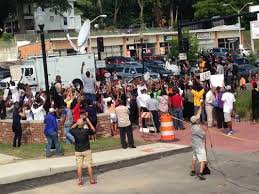 The latest news from Ferguson, Mo reveal new clues that do not paint a pretty picture. The state trooper who is in charge of directing the law enforcement at the protests in Ferguson, states that the people to blame for the unrest in the city were the violent agitators; and that those people were using the peaceful protests as a cover for committing criminal acts.

Ron Johnson, Missouri State Police Capt., told reporters stationed in Ferguson early this morning that following a night of unrest 31 people had been arrested. The day prior to that was filled with mostly peaceful protests, but as the night came, they turned violent. Johnson also revealed that a Molotov cocktail and two handguns were confiscated by authorities after the night protests.

The entire Ferguson town, with a majority of black population of 21,000 people, has been up in arms ever since teenager Michael Brown has been fatally shot by a white police officer after a confrontation that took place on the afternoon of August 9. The police have been accused of withholding information from the public, mistreating the protesters and keeping the name of the police officer involved a secret. The local authorities have fired smoke canisters and tear gas on a daily basis at the protesters.

Ron Johnson was visibly angry when he talked to the reporters this morning. He said that his officers had come under heavy shooting from the protesters and that at least two people had been hit. He went on to say that he did not have any more information regarding the health conditions of the shooting victims. Another four police officers were injured in the protests. The police did not fire a single shot, it was revealed.

Johnson said that protests should take place during the day, as there is a dangerous dynamic in the night, as he put it. He further said that officers could isolate troublemakers with ease during the daylight hours.

This nation is watching each and every one of us. I am not going to let the criminals that have come here from across this country, or live in this neighborhood, define this community.

What are your thoughts on the situation that is happening in Ferguson right now? Share your comments with us in the section below, we would love to hear what you have to say on this subject.