You are here: Home / National News / Jodi Aria will Represent Herself at Death Penalty Trial

It was revealed today that Jodi Arias will represent herself at the death penalty trial that awaits her. Jodi Arias has been in the spotlight for quite a while, ever since she was arrested for killing her ex-boyfriend, Travis Alexander in 2008. Arias was interviewed, used Twitter from prison and then the media forgot about her until today when it was revealed that Arias will act as her own attorney after a judge approved her request to represent herself.

The crime she admitted to committing is of a gruesome nature and experts are saying that her decision to represent herself might not be such a bad idea.

On June 4, 2008 Jodi Arias killed Travis Alexander; he was stabbed 28 times, was shot in the head and had his throat slit. Prosecutors argued that the Arias premeditated the killing after Alexander wanted to end their relationship. 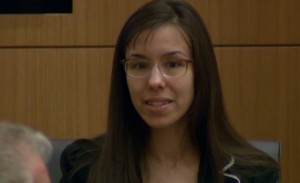 The woman was found guilty of first-degree murder in 2013, but the jurors could not reach a decision on her sentence. The Arizona law, where Jodi Arias’ murder conviction stands, the prosecutors have the option of putting on a second penalty phase with a new jury so that they try to secure the death penalty.

It’s actually probably a good idea to represent herself. She looks like a vicious psychopath with a ridiculous defense. However, the jury may find her pathetic. If she can get just one juror to bond with her on some level, even if they hate her, they’re getting to know her, and it’s harder to kill someone you know.

Arias got her GED in prison, she has no legal experience, no college degree and no high school diploma. Her defense lawyers are still on as advisory council, but they refused to comment on the decision.

If this new jury fails to reach a unanimous decision on September 8 when the second penalty phase is set, then the death penalty will be removed from consideration. This would lead the judge to sentence Arias to life in prison or eligibility for release after 25 years.

What are your thoughts on this decision? Do you think Arias representing herself is going to work for her or against her? Share your thoughts with us in the comment section below, we would really love to hear what you have to say about this.