You are here: Home / National News / Israel Winds Down Its Military Operations In Gaza and Proposes New Truce

Israel claimed that it has already achieved the majority of its objectives and would now wind down its operations in Gaza. Whether by themselves or due to international pressure coming especially from Western allies, Israeli officials stated on Monday that they would stop causing civilian casualties as they significantly reduce their military operations.

This truce was allegedly brokered with the help of Egyptian officials and should begin at 8 AM local time on Tuesday. Egyptian Foreign Minister stated that this truce should prevent future bloodshed and that it came out of a great concern for innocent lives that were being lost. The Ministry also noted that the new ceasefire was planned to last 72 hours and that apparently both Hamas and Israel would be respecting this time of peace. 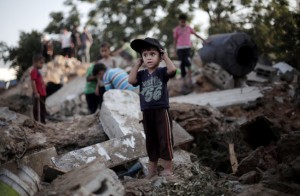 Although there have already been unfulfilled expectations and broken ceasefires, the world awaits a ceasefire that would finally be respected by both parties. In spite of the ceasefire (or lack thereof), Israel is positioning itself so as to conclude the military operations in Gaza. It seems that the formal ceasefire agreement isn’t of major importance

Senior Israeli officials explained that the IDF had carried out its mission of destroying Hamas’s tunnels that led from Gaza into Israel. The IDF also dealt Hamas an extremely significant blow and so, Israel feels confident enough to move their troops in defensive positions alongside the border. They have, however, explained that the Israeli air force would be prepared for any attacks and rocket fire (that most likely would be fired by the Hamas).

Israeli officials affirmed that they would be willing to inspect a cease-fire proposal and that they would be curious what the Egyptian government would be able to obtain during negotiations. Israel did not oppose any suggestion that they renew the negotiated ceasefire that had ended the Gaza conflict two years ago.

Discussions also addressed the possible reconstruction of Gaza and Israeli officials explained that as this reconstruction could require imports of building materials, they would request that the imports be overseen by either Egypt at the Gaza-Egypt border, or by Israel at Kerem Shalom.

Israeli Prime Minister Benjamin Netanyahu met with the IDF and said that their campaign would continue for as long as quiet and security aren’t a reality in Israel. In spite of the finished operations concerning the tunnels in Gaza, Netanyahu insisted that while Israel had no intentions of attacking Gazan residents, they would maintain the IDF in defensive position so that the Israeli population is kept safe.