Israel has finally accepted the cease-fire proposition that Egypt suggested and Hamas seems to also be content with the conditions. The two sides agreed to an indefinite ceasefire, although the deal itself hasn’t changed the dynamics of the Israeli-Palestinian conflict.

Consequently, many analysts have affirmed that realistically, 2,100 Palestinians and 69 Israelis lost their lives for nothing in the conflict that has just ended.

As for the agreement, Israel seems to have agreed to many pre-war Hamas demands while not actually getting much of anything.  Observers believe that Hamas got the longer straw. An Israeli reporter, Ha’aretz’s Barak Ravid, has affirmed that Israel hasn’t achieved anything in the Egyptian cease-fire that they agreed to. 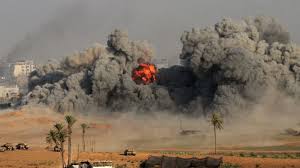 Another pre-war objective that Hamas achieved was the ease of restrictions on the Rafah crossing.

Other analysts, however, point out that neither side of the conflict will get exactly what the ceasefire terms state. Brent Sasley of the Arlington University in Texas explains that the ceasefire is nothing more than a truce as the one in 2012. What matters aren’t the terms of the truce but the way it is implemented.

Gaza still has tight restrictions on its activities, in spite of the greater freedom that Egypt and Israel have granted Gazans in theory. What Sasley points out is that although Egypt and Israel agreed to a theoretical increase in trade and movement freedom, it is not guaranteed that Gazans will also be experiencing that on the ground.

An important Hamas demand was dismissed by the ceasefire agreement: that of letting international money be used to pay Hamas employees. As the group was on the brink of insolvency before the war, they were forced to share government with the Palestinian Authority. As Israel also arrested hundreds of Hamas operatives, the group’s operation at the West Bank was significantly hindered.

Sasley also points out that war was extremely bad for Hamas as it gave Israel the opportunity of destroying one of their most important source of revenue: the war tunnels. Actually, although Hamas wins on paper, Sasley insists that by any metric, they lost the war because anything they tried to accomplish was shut down by Israel.