You are here: Home / National News / U.S. Airstrike Mission in Difficulty Because of Iraqi Tactic Modifications

After the newly launched United States Airstrikes, Iraqi militants have begun changing tactics and these modifications are complicating US airstrike missions.

Until now, American officials noticed that the IS (Islamic State) had been organized like an army- they moved strategically, they pursued military objectives and acted with planned and organized intent. Now, officials have begun noticing that the IS militants are shifting to insurgency tactics. They have begun to blend in with civilian population, making it that more difficult for American soldiers to target them. 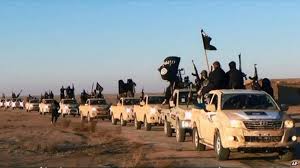 Lt. Gen. William Mayville Jr., director of operations, explained that as IS militants begin to dissipate and hide amongst civilians, the US army will lose a great deal of their advantages.

On the one hand, the U.S. airstrikes clearly proved that there is no such thing as the Iraqi Air Force and as a consequence is the fact that militants could quickly move across Iraq. On the other hand, Obama has clearly interdicted that US forces push the former ISIS group and since airstrikes could only then be effective if ground forces would keep applying pressure on ISIS militants, it seems that the American strategy is in a pickle.

Both Mayvile and Obama discussed the impact that the airstrikes could really have. They accepted that the operational tempo of the ISIS group could be disrupted for a while but that the true impact would not be visible. Mayville added that, while IS forces could be hindered temporarily, it would only be a matter of time until they regroup and move elsewhere to continue their waves of terror.

At the same time, the Iraq situation has created significant tensions between the White house, the State Department and the Pentagon. Apparently, the army must once again fix an issue that diplomacy failed at solving, while being offered very limited possibilities.

John Kerry, Secretary of State insisted to note that there would be no re-introduction of Unites States combat troops back into Iraq.

President Obama hinted on Monday that the United States could cooperate more efficiently where troops in Iraq are concerned if the government would bypass their prime-minister Nouri al-Maliki and name someone new as designate prime-minister.

If such a promising step forward could occur, Obama mentioned that U.S. efforts could be advanced and that American soldiers could join Iraqi forces in their fight against IS.

While this proposition may seem promising, the Islamic State has clearly stated that they would not be seeking an agreement in which power is shared with Kurds and Shias.