Astronomers operating the Hubble Space Telescope have had some interesting weeks where discoveries have kept them pretty busy. Last week, they discovered the unique magnifying lens galaxies. This week, astronomers observed another unusual phenomenon. They noticed that after a quite unique supernova explosion, a “zombie star” was left behind.

Zombie stars arise when dwarf stars aren’t fully engulfed by destructive supernova explosions. Consequently, the dwarf star survives, but only as a relic of what it once was. 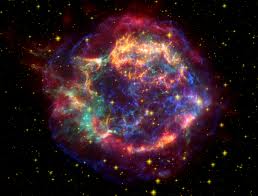 Around 110 million years ago, the star that is now a zombie belonged to a double star system. One of the stars in the system was burned-out and was sucking energy from its companion star until a supernova was formed. Normally, an explosion of a dwarf star is a cataclysm and completely destroys the star.

In rare cases, however, the explosion is less destructive that has recently been discovered. In such a cosmic event, the dwarf star isn’t destroyed. It survives, barely, as a shadow of what it once was. NASA calls such a star a “zombie star”.

What Hubble discovered is a mini-supernova located in the NGC 1309 galaxy. It is called SN2012Z and was first observed in January 2012. Then, a team of astronomers comprised of Saurabh Jha (Rutgers scientist), Curtis McCully (Rutgers grad student) and Ryan Foley from the Illinois at Urbana-Champaign University, decided to study the faint star that showed a lot of promise. They noticed that Hubble had seen the galaxy before, between 2005 and 2010.

The researchers tried to differentiate between the pre-and post-explosion pictures to pinpoint exactly which star system exploded. According to Anton Koekemoer, Hubble Astronomer, it is the first time that such research has been done for supernovae such as this.

The study of supernovae is important for several reasons, but most of all because the Type Ia supernovae allow astronomers to evaluate the expansion of the universe and to measure distances in space. Sadly, astronomers haven’t seen Type Ia stars before they exploded because these supernovae are too faint for detection.

The other type of supernovae, called Type Iax also involves white dwarfs. As a result, the detection of this particular Iax supernova before it exploded is that much more interesting.

Apart from this zombie star, Hubble also located another supernova called 2008ha, located in the UGC 12682 galaxy. What Hubble photographed is what appears to be a surviving dwarf star. All astronomers have to do now is to find images from its past.