You are here: Home / National News / Hawaii Avoids Being Hit by Hurricane as Iselle Downgrades to Tropical Storm

Hawaii has just escaped hurricane Iselle! It’s not that Iselle isn’t going to hit anymore, because it will, but it’s not a hurricane anymore; Iselle downgraded to tropical storm sparing Hawaii its first encounter with a  hurricane in 22 years. Right now the Big Island is experiencing strong winds and rain as tropical storm Iselle approaches.

At 1 a.m. local time tropical storm Iselle was 80 miles south of Hilo bringing with it winds of up to 60 miles per hour. This was reported by the U.S. Central Pacific Hurricane Center; they added initially Iselle was a hurricane of category 1 on the five-step Seffir-Simpson scale.

Due to this classification, flights had to be grounded, tourist areas shut and government offices closed. Commodity Weather Group LLC revealed that if Iselle had remained a hurricane, she would have been the first hurricane on the record to strike the Big Island. Jeff Masters, founder of the Weather Underground wrote in his blog that the last hurricane to hit the state of Hawaii was hurricane Iniki in 1992; it was a Category 4 storm that killed six and caused around $2 billion in damage.

Now that the storm is interacting with the island it is weakening and is down to tropical storm strength. The main impact will still be localized flooding and minor wind damage.

The good news stops here for Hawaiians, because another tropical storm is heading towards the state, tropical storm Julio. Julio is right behind Iselle and had top winds of 120 mph at 11 p.m. local time. Donald Keeney, a forecaster at the MDA Weather Services in Gaithersburg, said that the tropical storm was travelling west-northwest and it was 970 miles east of Hilo and it will probably pass north of Hawaii on Saturday and Sunday. 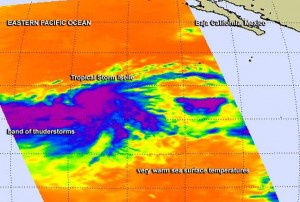 Keeney also added that Iselle will give Hawaiians up to 20 inches of rain per hour, which prompted Hawaii to close schools as well as government offices.

Hawaiian Airlines Inc. canceled flights in Maui, Kona and Hilo, it was revealed by the company in a statement.

What are your thoughts on this? Are happy Iselle downgraded to tropical storm? How will two tropical storms (Iselle and Julio) affect Hawaii? Do you know anyone there? Are you living in Hawaii? Tell us how things are over there in the comment section below.