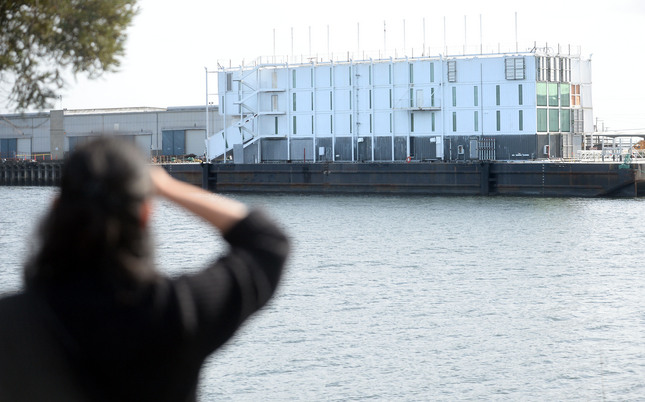 On Friday, Google confirmed the sale of at least one of its floating showrooms. The tech showroom that had been the subject of ridicule and speculation at some point is to be scraped in the near future; however, the giant Internet Company wouldn’t comment on the fate of the second barge located at the port of Stockton.

Richard Aschieris, executive director at the Stockton port, said the barge was still sitting there as it did when it first arrived. He added that there had been no signs of work being done on the floating platform.

Google’s announce comes at a time where there are also signs that their strategy for the futuristic headset, Glass, could be rethought. There were rumors that the traveling showrooms would not just be interactive spaces where everyone could learn about new technologies (as Google had stated), but that they would also be showrooms for Glass as well as other new Google products.

At one time, there were four such barges that Google owned. Two of these barges were parked on each U.S. coasts. Contractors were hired to build these unusually shaped structures , one in San Francisco Bay and the other in Portland, Maine.

The company hasn’t revealed much about the barge project. Google only confirmed they had sold the barge on the East Coast vessel after a Portland newspaper featured an article on the topic.

Port officials in Stockton have said that since the barge had been moved in March, they haven’t heard from Google. Aschieris said that as long as the dock fee is in order, they have no reasons to be dissatisfied. Standard rates for holding the barge in Stockton are around $12,000 a month.

On the other hand, Executive Director Larry Goldzband from the conservation commission claimed that he received no updates from the Internet Company, which would require the approval of his agency, were they to park their barge in San Francisco Bay.

The Company’s plans with Glass are as vague as their intentions with the floating showrooms. Initially, they were supposed to start selling Glass as consumer products in 2014, but after they took on a veteran marketing executive in May, plans to be selling Glass were postponed to the end of the year, co-founder Sergey Brin stated. New frames and software are still being released by Google for those purchasing Glass through limited programs, although the company is also touting other gadgets such as smart watches.