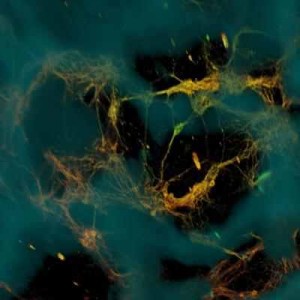 The brain is by far the most complex organ of the human body and now a small, yet huge breakthrough has been made in the field if bioengineering. Scientists have managed to create a 3D tissue model of a brain that can mimic brain function.

Researchers over at Tufts University in Medford, MA, have managed to engineer a 3D tissue model of the brain of a rodent. The findings were published in The Proceedings of the National Academy of Sciences.

David Kaplan, PhD, is the senior author of the study and a Stern Family professor; he’s also chair of biomedical engineering of the Tufts School of Engineering. He stated that the model paves the way for a plethora of new studies into brain function, disease, injury and treatment.

In order to find out how brain neurons work, the scientists grow then in petri dishes, but this is quite unsatisfactory, as the complicated brain tissues (which has segregated areas of white and grey matter) cannot be replicated with the 2D neurons. White matter has bundles of axons, which are nerve fibers and they are responsible for transmitting signals between brain neurons.

Scientists have previously tried to grow neurons in 3D collagen gel environments but never with success. The Tufts researchers have found a way to create a 3D brain tissue model that is functional, it can incorporate segregated white and gray matter regions and it can also live for more than 9 weeks.

The 3D brain tissue model was created by combining two biomaterials: a collagen-based gel and a silk protein. The silk protein served as a porous sponge for the neurons to attach to and the gel encouraged growth.

The sponge was then cut into the shape of a donut and it was colonized with rat neurons; afterwards the collagen-based gel was added to the mix.

Once the neurons were inside the 3D brain tissue model, they started creating functional networks inside model and nerve fibers were created that would connect with the fibers on the other side of the donut. This created very rudimentary grey and white matter regions.

The scientists then took notes and it was observed that the 3D brain tissue model managed to stay alive for up to 5 weeks.

Program director of tissue engineering at the National Institute of Biomedical Imaging and Bioengineering, Rosemarie Hunziker, PhD, had this to say about the study:

This work is an exceptional feat. It combines a deep understanding of brain physiology with a large and growing suite of bioengineering tools to create an environment that is both necessary and sufficient to mimic brain function.

What are your thoughts on this? Drop us a line in the comment section below.