It seems that Facebook wants to control everything related to the Internet and social media channels. First, it announced its participation on the Internet.org initiative, and just a few days ago it started demanding users to install the messenger app on their smart-phones. This means that Facebook users will no longer be able to chat with their friends without installing the controversial app.

Some believe that the company is having privacy issues, while others think that Facebook has become such an important part of peoples’ lives that consumers will always want to download the app on their phones. The Facebook messenger app has amassed a staggering 1 billion downloads since its inception. 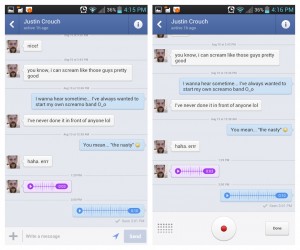 The bad news is that, when downloading the app, the user must agree to grant access to several sections of his smart-phone data. Mobile device users might not realize this, but access granted may very well extend to allowing the app to send SMS messages, read personal data stored on the phone, and recording sounds, videos or photos without the phone operator’s knowledge. There has already been a lot of heated debate on the subject of data security and privacy, and Facebook’s permission requests might make it easier for government officials to track our data.

On the other hand, it could ‘simply’ mean that the app users are giving Facebook a means of finding out everything about their social lives, even offline. Thousands of users have already voiced their disgust about the app, through poor ratings in store, but developers are probably not losing sleep because of this. The Facebook messenger app still remains one of the most popular apps on the market, despite its latest update and the bad reviews received from disgruntled users.

In the meantime, Facebook has denied all rumors regarding its privacy issues. The company claimed that it simply wants to “avoid confusion of having separate Facebook experiences”. While the app is intuitive and useful, many ask if it is safe to give permission to their personal data. Facebook also added that permissions are required to make the app work, and they have nothing to do with spying on its users. Their explanation for permissions request was that Facebook must pre-load newsfeed content compatible with a user’s friend lists and interests.

The situation may very well be a result of poor communication on the company’s behalf, but it might also mean that something deeper is going on. Internet and smart-phone users should think twice before allowing access to their personal data.