You are here: Home / Health / The Ebola Outbreak Forces WHO to Declare Public Health Emergency

The modern world is facing one of the most severe Ebola virus outbreaks in history. Approximately 1000 casualties already reported in West Africa has forced the World Health Organization to declare international public health emergency Friday. This means that it demands an “extraordinary” response from officials. Since the regulations enforcing such alarms were adopted (in 2007), this is the third time that international public health emergency is declared.

Its already six months since the outbreak began, and the situation is far from being contained. The organization acknowledges that the virus is still running rampant, and it suggested that travel and trade bans be implemented to keep it from spreading. Another important medical organization called Doctors Without Borders request “massive deployment” of health specialists to the infected countries. 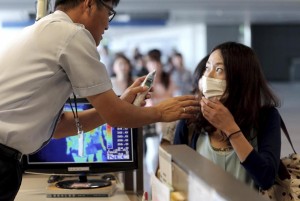 “Lives are being lost because the response is too slow” says the D.w.B.

The history of the Ebola virus begins nearly four decades ago, and Margaret Chan, of the World Health Organization, said that the current outbreak is the largest, most severe and most complex one to day.

“I am declaring the current outbreak of the Ebola virus disease a public health emergency of international concern (…) Countries affected to date simply do not have the capacity to manage an outbreak on this scale on their own.”

There seems to be no good news for the future months, but Dr. Keiji Fukuda, WHO’s head of health security believes that even if things get worse for a while, they will be prepared to handle the situation. Nevertheless, WHO urges all the states where the disease has spread (or can be spread) to declare a state of emergency. This means that they must screen everyone leaving at international airports, land crossings or seaports. In addition to this, people suspected of carrying the Ebola Virus must be prevented from traveling.

On the bright side, Ebola spreads with great difficulty, so a general ban on travel to or from places was not necessary.

“We don’t believe a general ban on that kind of travel makes any kind of sense at all.” Fukuda declared

Health specialists remain skeptical of WHO’s declaration. On one hand they appreciate the fact that the organization is taking the problem seriously, but they believe that mere statements will not save lives.

“Declaring Ebola an international public health emergency shows how seriously WHO is taking the current outbreak, but statements won’t save lives (…) It is clear the epidemic will not be contained without massive deployment on the ground.”

Until now, the Ebola virus has taken 961 lives in Liberia, Sierra Leone, Guinea, Nigeria and two on the plane. Some believe that WHO’s response has come a little too late. The outbreak was identified months ago in Guinea, but it seems that authorities in the affected regions chose to deny or ignore the gravity of their crisis.

This has led to a slower response, and the inevitable spread of the disease. There are even reports of the virus reaching Uganda. We will keep you posted.