You are here: Home / Health / Ebola Patients Flee after Attack on Clinic 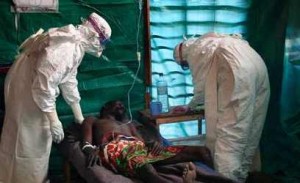 Efforts to contain the deadly Ebola virus seem to have been blown to smithereens when club-wielding youths attacked a quarantine center in Monrovia, Liberia, forcing the Ebola patients to flee from the enclosure.

This attack seems to have highlighted the difficulty with which health officials are battling the Ebola epidemic in the West African countries. The current Ebola outbreak is the largest outbreak of its kind in the history of the virus, killing 1,145 since erupting earlier this year.

One of the biggest challenges that the officials are dealing with, aside from trying to contain the virus and treat the sick, is fighting the community and its mistrust that there even is an Ebola threat. The people in the countries where Ebola is killing people don’t believe that Ebola is a real threat. They believe that the virus was either invented by the West and brought there to kill people or that it is a hoax.

Rebecca Wesseh, an eye witness to the attack on Ebola clinic said that:

They broke down the door and looted the place. The patients have all gone.

The attackers were mostly young men with clubs in their hands. Witnesses said that they entered the center shouting insults to President Ellen Johnson Sirleaf and that there’s no Ebola. The patients present in the Ebola center fled the scene, as well as some nurses, for fear of being attacked by the thugs.
A health ministry official who wishes to remain anonymous declared that the young men took medicines, bedding and mattresses from the isolation center, which was once a high school.

Ebola is a highly contagious disease which spreads by contact with the bodily fluids (blood, sweat, semen) of an infected person. As of now, there is not cure or vaccine available.

It was revealed by George Williams, the head of Health Workers Association of Liberia, that the unit was used to house 29 Ebola patients who were receiving preliminary treatment before being taken to a hospital for better care. He added:

Of the 29 patients, 17 fled last night (after the assault). Nine died four days ago and three others were yesterday taken by force by their relatives from the center.

What are your thoughts on this matter? Why do you think so many people in the West African countries, where Ebola is killing people, do not believe Ebola to be a real threat? Care to share your comments in the section below?