You are here: Home / National News / Earthquake in China Kills at Least 367 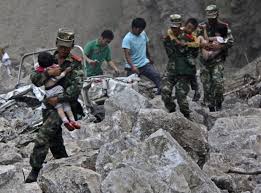 China’s Yunnan province was shaken on Sunday by a strong earthquake that left more than 1,800 people injured, toppled thousands of homes and killed 367 people.

The U.S. Geological Survey said that the quake magnitude was 6.1 on the Richter scale. The epicenter was in Longtoushan township (located 14 miles southwest of Zhaotong), at a depth of 6 miles.

Zhaotong residents described the earthquake as a “battlefield after bombardment”, Xinhua explained. Thousands of houses now lay in ruins in the earthquake’s wake.

Xinhua news stated that out of the casualties, 122 of the dead were Ludian residents. Another 49 people died in the Qiaojia County and 102 were injured.

On Sunday night, rescuers were still busy searching for victims in the remote towns where the quake had struck, news reports said. Countless photos appeared on Weibo, the Chinese social media site, where rescuers were trying to reach victims through flattened buildings and toppled bricks.

According to Xinhua, Qiaojia County has a population of 580,000 while in Ludian, the population is of about 429,000. After the earthquake struck, Ludian was left with no electricity and telecommunications. The news agency explained that in Ludian, for instance, the homes that now lay in ruins were mostly old brick houses.

Currently, the Chinese Red Cross Society is making tremendous efforts to help citizens who are in need of aid. More than 2,000 quilts, 2,000 jackets and 200 tents were allocated for those who had been made homeless by the earthquake. Relief supplies have also been sent by other Red Cross branches from Hong Kong, Macau and the Sichuan province.

Xinhua explained that the region where the earthquake struck is largely agricultural and that it is prone to earthquakes. CCTV (Chinese state broadcaster) said that this earthquake was the strongest to occur in Yunnan in the last 14 years. In the past, there have been similar incidents that resulted in the death of 15,000 people (the 1970, 7.7-magnitute earthquake in Yunnan). September 2012 was another year in which earthquakes claimed the lives of Chinese citizens, with 81 people who were killed as a result of a series of quakes that also occurred in the Yunnan region.

The Sichuan province has also experienced serious quakes: in May 2008, for instance, 90,000 people died or went missing after a powerful quake hit the region.