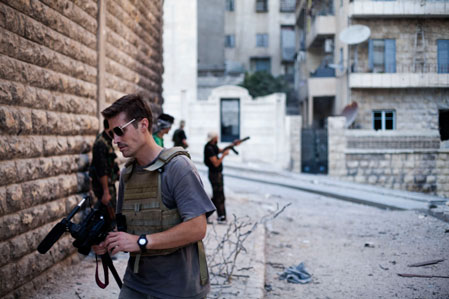 The captors of American journalist James Foley apparently demanded an initial ransom of $132.5 million. According to Philip Balboni, the president and chief executive of GlobalPost, the sum was asked from both Foley’s family and GlobalPost.

Foley was abducted in northern Syria while covering that country’s civil war and had not been heard from since.

But on Tuesday, Islamic State, the militant group formerly known as ISIS, released a video showing a militant beheading Foley in response to U.S. airstrikes against militant positions in Iraq. Moreover, at the end of the video, the militant is shown threatening to behead another missing American journalist, Steven Sotloff, 31. “The life of this American citizen, Obama, depends on your next decision,” is the message at the end of Foley’s execution film.

“He was just following his passion and love for writing,” Sotloff’s college roommate, Emerson Lotzia, said of him. He was abducted in August 2013 near Aleppo, Syria’s largest city. “Steve is very intelligent, book smart and street smart, and fearless. I don’t know any challenge he’d turn down.”

According to The New York Times, ISIS militants had previously pressed the U.S. to pay a multi-million dollar ransom in exchange for Foley’s release, but their demand was refused. ISIS is threatening to kill at least three other prisoners it holds prisoners if its demands remain unmet.

The terrorist group has sent a hefty list of demands for the release of the remaining foreigners, starting with money but also prisoner swaps, such as the liberation of Aafia Siddiqui, an M.I.T.-trained Pakistani neuroscientist with connections to Al Qaeda, who is currently incarcerated in a prison in Texas.

There are two teams regarding release policies. There’s the US and Britain on one hand, and the European allies on the other, who have paid incredible amounts of money in order to release their prisoners. For instance four French and three Spanish hostages were released this year after money had been delivered through an intermediary.

According to an investigation by the New York Times, Al Qaeda and its affiliates have earned at least $125 million in ransom payments during the last five years. US Government officials argue that responding to terrorists’ demands will only make this situation worse.

Meanwhile, new details are being sought about the identity of the militant who beheaded Foley in the video. American and British intelligence officials are trying to find him mainly after his vocal traits, because he speaks in the video with a distinct British accent and is therefore believed to be from London or southeast England.