You are here: Home / Health / British Man Infected with the Ebola Virus Begins Treatment in London 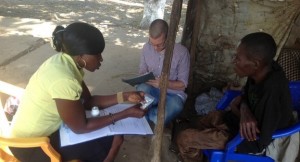 William Pooley contracted the deadly virus, while volunteering as a nurse in Sierra Leone. He returned to London where he is beginning treatment for the disease. The 29-year-old man is described to be a hero by the charity organization he volunteered for.

The man was flown to London on Sunday, with a specially equipped military aircraft. He’s currently in isolation at the Hampstead’s Royal Free Hospital, where he was escorted by police. Pooley volunteered to go to Sierra Leone and take care of the victims of the largest Ebola outbreak kin history, which killed around 1,500 people.

Ever since the current Ebola outbreak has started in March of 2014, William Pooley is the first confirmed case of a Briton to have contracted the deadly virus.

Pooley is thought to be from Woodbridge in Suffolk, but we are still awaiting confirmation for that piece of information. What we do know is that he was flown out of the African country of Sierra Leone in a RAF C-17 transport aircraft, from Lungi’s the country’s main airport.

William Pooley will be receiving treatment in an isolation unit for patients sick with highly infectious diseases and will be inside a special tent that will ensure that medical staff can interact with the Ebola patient, but also be separated from him.

While in Sierra Leone, Pooley had initially worked as a volunteer at The Shepherd’s Hospice in Sierra Leone (March-July), but had requested to be relocated so that he would serve on the Ebola treatment ward at the Kenema Government Hospital, after hearing that patients were being abandoned because health workers were getting sick with Ebola and dying.

The executive director of The Shepherd’s Hospice, Gabriel Madiye, declared that the young man was aware of the risks and still chose to work in the hospital.

We consider him a hero. Somebody who is sacrificing to provide care in very difficult circumstances – when our own health workers are running away.

There are no vaccines available for Ebola and there is no cure, either. Some experimental treatments are being tested on people, but until now, there have been no signs that a cure may be close. British pharmaceutical company, GlaxoKlineSmith, has revealed that they are planning to release an Ebola vaccine as soon as possible; the vaccine has moved on to human trials, but no official information on how the trials are going has been given.