You are here: Home / National News / Bodies Found on Mount Rainer, Everyone Wonders About Vanished Hikers

The spokeswoman for Mount Rainier National Park stated that the three bodies had been spotted last week while helicopters were inspecting the area during training flights. They were located in an extremely dangerous part of Mount Rainier, below Willis Wall, right at the top of Carbon Glacier. Mrs. Wold explained that everyone is considering how the bodies could best be removed from the mountain without putting the rescuers at risk. 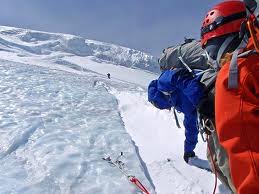 She added that there is no need that the public begin assuming that the three bodies could belong to the six climbers that were last seen in May, when they left attempting to trek up a tough ascent of the 14,100 foot mountain. The hikers were last seen in May, and two days into their journey, they used their satellite phones to call via satellite phone, when they had reached 12,800 feet. During their attempt to complete the Liberty Ridge hike, the climbers disappeared.

According to park officials, the hikers must have been either struck by an avalanche or have fallen and were presumed dead.

Officials also explained back in May that there was no possibility that the hikers could have survived their trip when searchers found a debris field that covered hundreds of feet over Carbon Glacier, where tents, clothing and debris were identified.

According to experts, the pattern in which the debris were strewn down suggests an avalanche, so it is highly possible that the 6 hikers were surprised by an avalanche or rockslide.

Fawn Bauer, spokeswoman for the National Park Service sadly confirmed that rescuers believed that there was no chance of survival for the hikers.

While rock and ice are still in place, rescue missions are impossible, but according to officials, the bodies of the three hikers will be retrieved when rock and ice fall off the wall. The increase in new crevasses makes it extremely difficult for park officials to recover the bodies. There is currently no possibility of climbing the Liberty Ridge route because of unstable conditions and because of the high risk that ice falls from the walls due to the warm weather.

The six climbers who attempted to take the Liberty Ridge route had traveled from Singapore, Minnesota and New York to ascend this difficult route. All climbers were experience and technically prepared to tackle such a difficult climb.