Last month, a medical researcher was arrested at the Phoenix airport for carrying a loaded assault rifle with him. On Monday, that same medical researcher explained that the only wanted to make a political statement and that hurting anyone was out of the question.

On July 25th, Peter Nathan Steinmetz, 54, walked into the Phoenix airport with the assault rifle over his shoulder and suddenly pointed the weapon at a 17-year old girl and her terrified mother. Soon after, authorities apprehended him. 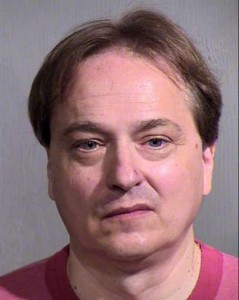 On Monday, during a public statement, Steinmetz explained that his actions only meant to prove that any American could be a peaceful citizen and carry a firearm, no matter how large, for his protection and the protection of his community. He insisted that he did not point his gun at anyone and explained that he behaved like a responsible and educated gun owner. Lastly, he added that the gun safety was on at all times.

The American was not charged over the airport incident. The medical researcher claimed that he was in his full right (as attested by the Second Amendment) to bear a firearm. While he intended to hurt no one, he decided that bringing his AR-15 to the airport would make an excellent political statement and would publicly and harshly criticize the Transportation Security Administration. In Steinmetz’s opinion, the agency not only disarms people but also subjects them to unacceptable invasions of their privacy.

When he was apprehended, the medical researcher employed at the Phoenix Barrow Neurological Institute explained to the police officers that he had simply come to the airport to buy a cup of coffee. At the time, he was arrested on suspicion of two felony counts.

According to a court attorney spokesperson, on Monday, the case had to be returned to the police so that further investigations are conducted.

The medical researcher is not at his first such incident with the police. Sergeant Steve Martos, from the Phoenix Police, explained that Steinmets had other arms-related issues. For instance, last November, he again entered the airport armed (this time, to pick up his wife). At that time, the medical researcher was accompanied by his minor son who had also been carrying a weapon. The two were not charged.

The question is how the state can deal with such issues that border on forms of terrorism, since the intimidation of other citizens with assault weapons could be views as such. As authorities cannot prove beyond a shadow of a doubt what Steinmetz’s intentions were, such extremist behaviors should be discouraged.