You are here: Home / Health / American Ebola Patient “Seems to be Improving”, says the CDC

An American doctor, Kent Brantly, was infected with Ebola. He is the first known Ebola patient in the USA. According to the Centers for Disease Control and Prevention (CDC) chief, he “seems to be improving”. This is encouraging news according to Thomas Frieden.

“That is really important and we are hoping he will continue to improve.” Thomas Frieden said on CBS

Kent Brantly is currently being treated on United States soil. He landed at the Dobbins Air Reserve Base on Saturday. From there, he was rushed to the Atlanta Emory University Hospital. At the moment, there are two known cases of Americans suffering from the Ebola disease, a fatal viral hemorrhagic fever. They fell ill while serving on the front lines of a huge outbreak in West Africa. 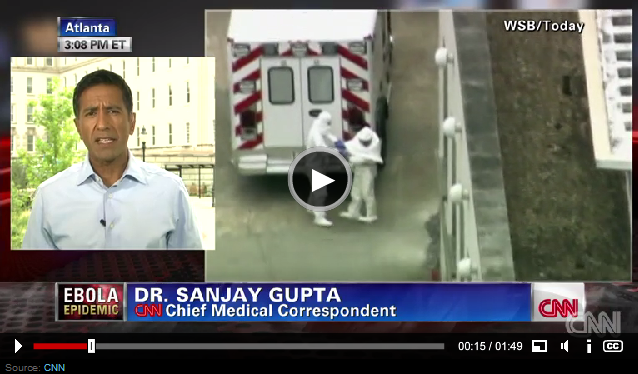 One video footage taken at Emory shows a person in white, full-body protective suite helping a similar person emerge from the ambulance and being walked to the hospital.

Brantly, 33, and Nancy Writebol will be treated in an isolation unit at the Emory Hospital. Writebol will soon be picked up from Liberia, because the isolation unit in the plane can only transport one person at a time. She will be brought to Georgia in the following week, says Todd Shearer, of the Christian charity Samaritan’s Purse.

Brantly’s wife, sister and parents saw him in the video footage and cried.

“I spoke with him, and he is glad to be back in the U.S. (…) I am thankful to God for his safe transport and for giving him the strength to walk into the hospital.”

His wife, Amber, and their daughter also visited him in Liberia, but they did not come in contact with him when he was sick. Frieden believes that they are not at risk. Amber visited him, once again, on Saturday, from behind a glass wall, says a Samaritan’s Purse spokesperson. Brantly is extremely grateful.

What happens now? It seems that Brantly and Writebol will be the first American Ebola patients to be treated in an U.S. medical facility. Precations are being taken, to prevent the disease from spreading, sais Dr. Bruce Ribner, the unit supervisor.

The unit is isolated, and everything  going in and out will be controlled by him. Ebola cannot spread through airborne or waterborne methods. The only way to contract it is through the contact with bodily fluids (blood, urine, secretions, saliva), or organs.

FDA has yet to approve a treatment for Ebola, so the Emory hospital will be using “supportive care”. In other words, they will track symptoms, signs, organ function etc. Treatment methods include dialysis, and blood transfusions. Ribner says that all they need to do is keep the patients alive long enough for their bodies to control the infection on their own. Writebol has received an experimental serum this week, but no results were recorded.