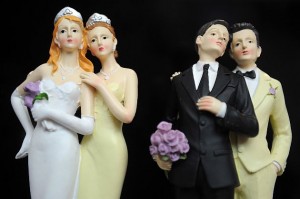 Yesterday a federal judge ruled Florida’s gay-marriage ban unconstitutional and ordered the state of Florida to recognize marriages that were legally performed elsewhere. Robert L. Hinkle, U.S. District Judge, stayed his order immediately until after the appeal process is to be completed.

When observers look back 50 years from now, the arguments supporting Florida’s ban on same-sex marriage, though just as sincerely held, will again seem an obvious pretext for discrimination. Observers who are not now of age will wonder just how those views could have been held.

Nine married couples were among the 22 persons who sued Florida to recognize their marriages that were performed outside the state or to grant them marriage licenses. SAVE group, an LGBT group, have eight same-sex couples who are plaintiffs in this case.

Tony Lima, SAVE Executive Director, released a statement which read:

While we are overjoyed that the judge erred on the side of fairness by ordering the state of Florida recognize the legal marriages of the plaintiffs, we will continue to make the case that it is Florida’s responsibility to recognize the legal marriages of ALL same-sex couples, and not only those named as plaintiffs in our suit. SAVE will continue to advocate for a pro-equality ruling as the court examines the case further in the weeks and months ahead.

A spokesperson for Florida Attorney General Pam Bondi, Whitney Ray, refused to reveal is Bondi’s office was going to appeal and added that they are reviewing the ruling.

In March 2014, eight same-sex couples sued the state of Florida for failing to recognize their marriages. They all had married legally inside the United State, in states where same-sex marriages are legal.

In April, another plaintiff was added: Arlene Goldberg whose wife, Carol Goldwasser had died in March. They had been together for 47 years and had moved from New York to Florida in 1989. They were married in the state of New York in 2011.

Howard Simon, executive director of the ACLU of Florida said in a statement:

It’s the first federal decision in Florida. When the stay is lifted, it will have statewide impact. What it will mean, when the stay is ultimately lifted, is that their families will be protected and strengthened. They’ll start getting health insurance, pension benefits. They could protect their families with survivors benefits. These are the dramatic, practical ways that this victory will ultimately help families in Florida.

What are your thoughts on this matter? Do you live in the state of Florida? How does this affect you? Share your comments in the section below, we love hearing from our readers.