You are here: Home / National News / 1 Died and 2,500 Other Were Stranded after Thunderstorms Hit South California

According to officials, one person died and 2,500 other people were stranded after thunderstorms violently hit Southern California mountain communities on Sunday. The storms caused serious mountain mudslides. The storms dropped about 3 ½ inches of rain on Forest Falls, according to the National Weather Service. 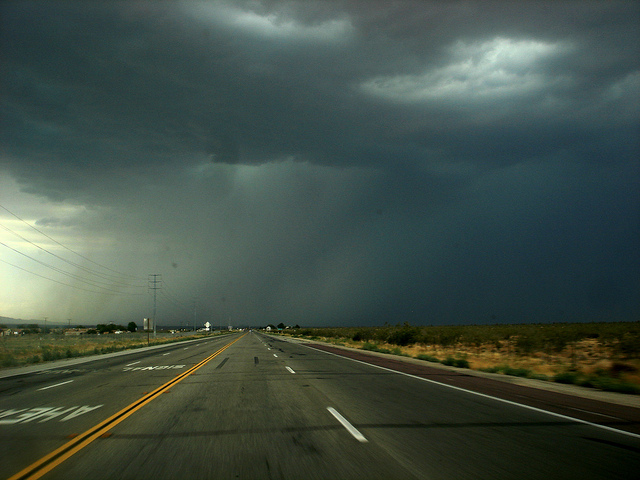 A body was found Sunday in a car that was swept into the rain-swollen watercourse in Mount Baldy, said San Bernardino County Fire spokesman Chris Prater. The storms brought flash floods that needed a few rescues and hypothermia treatments, while thick debris flows cut off access to two mountain towns and stranded 1,500 residents of Oak Glen, and another 1,000 residents of Forest Falls.

“Every rescue unit we have, every fire engine we have in San Bernardino County” had been sent out, county Fire Capt. Josh Wilkins said. “We are literally approaching the maximum right now in terms of our call volume. (…) The whole thing could be repeating itself.” Near Palm Springs, flooded roadways were reported across the Coachella Valley as lightning lighted up the sky, accompanied by the powerful sound of thunder that boomed behind the rain.

The National Weather Service had issued a flood warning for the area until 8 p.m. The stormy weather is expected to continue Monday, but Sunday was the absolute storm peak.

Roads across the area were completely washed out. A road was closed to non-residents at Highway 38 and it was unclear when Valley of the Falls Drive would be reopened.

Moreover authorities had to make reverse 911 calls to urge residents to stay put while crews cleared the roads with provided bulldozers as well as other heavy equipment in an attempt to reach about 500 children at a nearby church camp. “Our concern is that they’re isolated at that campground and no longer have access out of the mountain,” San Bernardino County Fire spokesman Kyle Hauducoueur said.

The rescue of at least two people in the San Bernardino Mountains was life-saving. According to Hauducouer, a woman in Mt. Baldy was rescued from her house before it was immersed in mud. Four other homes in the Bear Creek area were damaged by the debris flow, he explained.