You are here: Home / Health / WHO Announces that Ebola Death Toll Increases 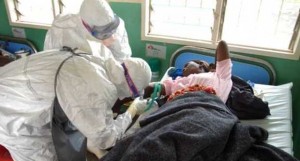 The World Health Organization has announced that the Ebola virus is continuing to spread in the West of Africa, crossing the borders between Liberia, Sierra Leone and entering Guinea. There are large numbers of new cases and death in this region, with 44 new cases between the 6 and 8 of July.

The total number of cases since the outbreak in February of this year is 888 cases and 539 deaths. There is a regional center to be set up in Guinea to coordinate the response to this outbreak. The agency had the following to say about the situation:

The epidemic trend in Liberia and Sierra Leone remains precarious with high numbers of new cases and deaths being reported. The sub-regional center will be responsible for ensuring effective use and deployment of limited and scarce, but highly critical resources based on prioritization and agreed objectives.

There is a solidarity fund set up by the Economic Community of West African States (ECOWAS) to promote a regional approach to this Ebola epidemic. Nigeria showed its support by donating $3.5 to the states where the outbreak is currently at.

Ebola virus disease starts at around two or three days after the person has contracted the virus. It usually starts off with a fever, muscle pain and throat ache and headaches. The next wave of symptoms includes nausea, diarrhea and vomiting and also a decreased functioning of the kidneys and liver. When this happens, external and internal bleeding is very common.

The disease is contracted by the coming into contact with the bodily fluids or blood of the people or animals infected with the virus. Animals include monkeys and fruit bats; the latter are known to carry the disease without showing any signs of infection. Also, the fact that the funeral rituals in these states include the touching of dead bodies doesn’t help with the containing the virus spread.

Up to 90% of those infected die and men who manage to survive the disease can spread it sexually for up to two months after they’ve been cured from it. It may be hard to believe, but there is no treatment for this horrible disease and no vaccine. This present outbreak of Ebola is the largest in history.

Are you worried about Ebola? What are your thoughts on this distressing news? Care to comment about it? Drop us a line in the comment section below.